About 245 million turkeys are slaughtered each year in the U.S., with over 22 million killed just for Christmas. PETA, People for the Ethical Treatment of Animals, an American animal rights NGO, has been advocating this issue for years

The organization is based on one fundamental belief: Humans have no higher status than animals. They are working hard to spread the message that we are all living beings with thoughts, feelings, and desires, and none of us (human or non-human) exists to serve the other.

This Christmas, PETA decided to act a little differently than expected in an effort to win over more hearts. Hence, the Dream Farm Studios team took advantage of animation wizardry and the power of Christmas ads to further raise society’s awareness of veganism and animal cruelty.

There, the idea of “The PETA Christmas Spot,” as we know it now, came to life

With a charitable approach, organizations like PETA usually try different ways to convey their well-intentioned faith and spark audiences’ emotions. While planning for a marketing campaign event, the crucial steps that must be taken are to pick the suitable and most effective approach to follow and choose the right partner to collaborate with to get the best possible result.

For the Christmas campaign, PETA decided to put positivity first. In fact, instilling an upbeat mindset and language with the core intention of helping is a proven strategy for conveying messages and getting your point across. The positivity hypothesis supports this when it posits that people are particularly sensitive to multimedia instructional messages’ optimistic or negative manner and tone.

PETA conveys a bittersweet message. This organization publicizes the violation of animal rights and the suffering and injustice they endure. By educating people and arousing their consciences, PETA aims to stop this level of cruelty and brutality, believed to be done by humans.

Not everyone finds it easy to hear and comprehend this subject. Most individuals instinctively avoid negativity, depressing news, and things that might hurt their emotions. No one likes to feel guilty and such organizations are expected to adopt a strategy that does not create such feelings in their audience.

Nonetheless, if we dig a bit deeper into our personal memories, we realize that the vast majority of the cartoons that make up our childhood have tragic and sad tales in nature. Yet, even as young children with fragile emotions, we enjoyed watching animations like Cinderella, Anastasia, The Lion King, Bambi, and many more.

This is the beauty of animation!

As a powerful medium, animation successfully captures the sad realities and tragic moments to tell the heart of the story, but at the same time, visualizes them in an entertaining, enjoyable, and not-so-heartbreaking way.

This was precisely why PETA needed a powerful animated commercial to increase public awareness while securing positive responses and feedback.

Let there be peace on earth. And let it begin with us

The Dream Farm Studios team began the production of the PETA Christmas advert after the strategy and timeline were determined. Hours-long sessions of storyboard review and revision, meetings, and frequent conversations ultimately led to the final PETA Christmas ad storyboard.

And this is when the adorable “Toby the Turkey” was born! 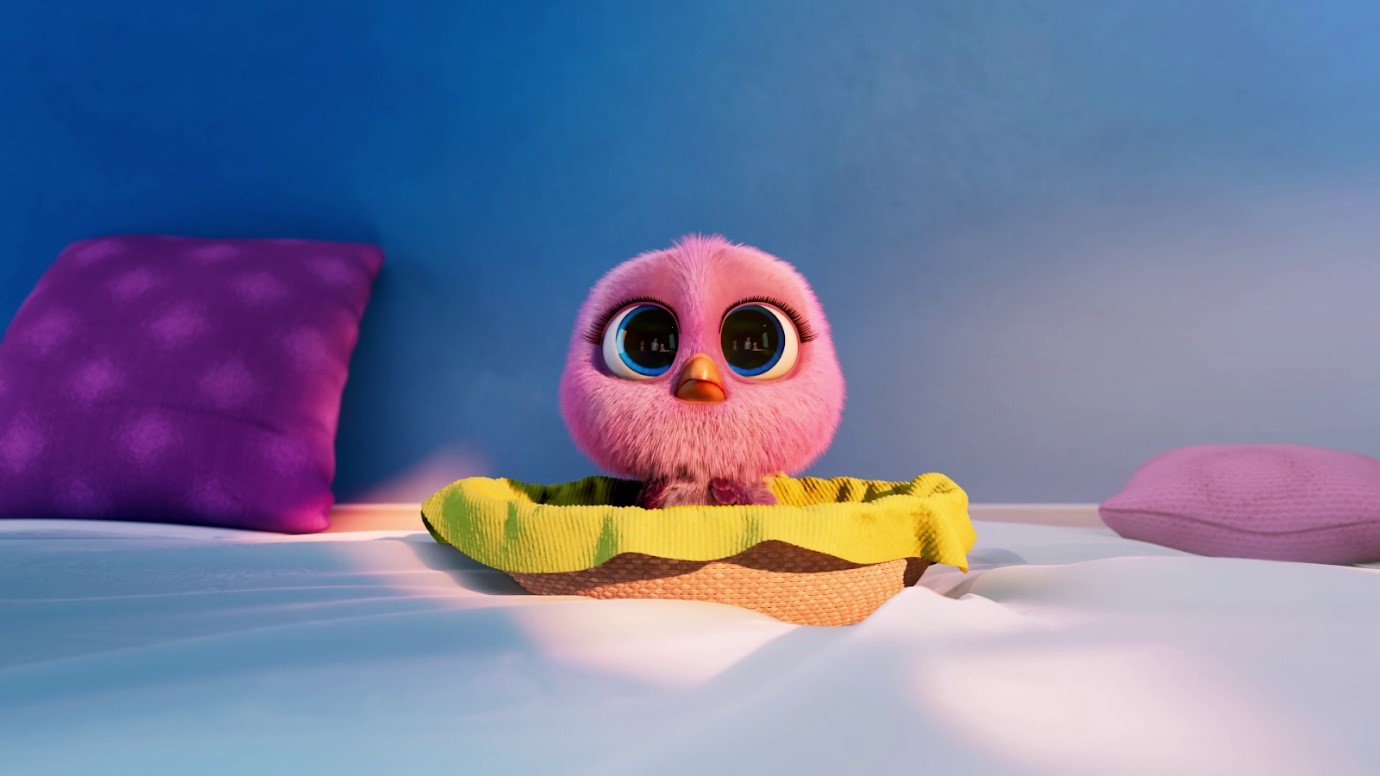 It all starts when Toby escapes (somehow, luckily, saved by his mama) from a truck full of other turkeys bound for the slaughterhouse. He is rescued by a kind family, who raise him and keep him as a member of their own – the adaptive little brother.

On Christmas Eve, while Toby is peacefully watching television, he notices a TV commercial and instantly recognizes the Happy Turkey Farm logo that was on the truck he fell out of as a baby.

He freaks out and assumes that his human family will also eat him as their Christmas meal. However, in the final scene, it is surprisingly revealed that Toby’s family is vegan and they all enjoy a vegan Christmas dinner together.

is more than a blog!

we have ideas & tools that will
make your commercial videos tick!

is more than a blog!

we have ideas & tools that will
make your commercial videos tick

On paper, this story appeared to be EXCELLENT. Yet, several key considerations had to be addressed during the animation’s production for PETA’s audience to truly understand the video’s message and get inspired.

Despite the human family, Toby is NOT a human

To glorify the natural affection humans feel for animals and to create a more powerful bond between humans and non-humans, some creators decide to use the technique of anthropomorphism; Giving animals a humanized personality. This is seen in many cartoon characters; the most famous ones might be Tom and Jerry, who act and behave completely like humans- There were times when we might have completely forgotten they were actually a cat and a mouse!

When it came to Toby, this was a huge NO.

Despite having a human family, he wasn’t intended to be seen as a human. Toby wouldn’t be able to effectively communicate the video’s message and ultimately elicit empathy and understanding of his situation if he had adopted a human personality and lost his animal nature.

Creating a balanced identity for this little turkey was something the Dream Farm Studios’ creators tried to do in the best possible way. 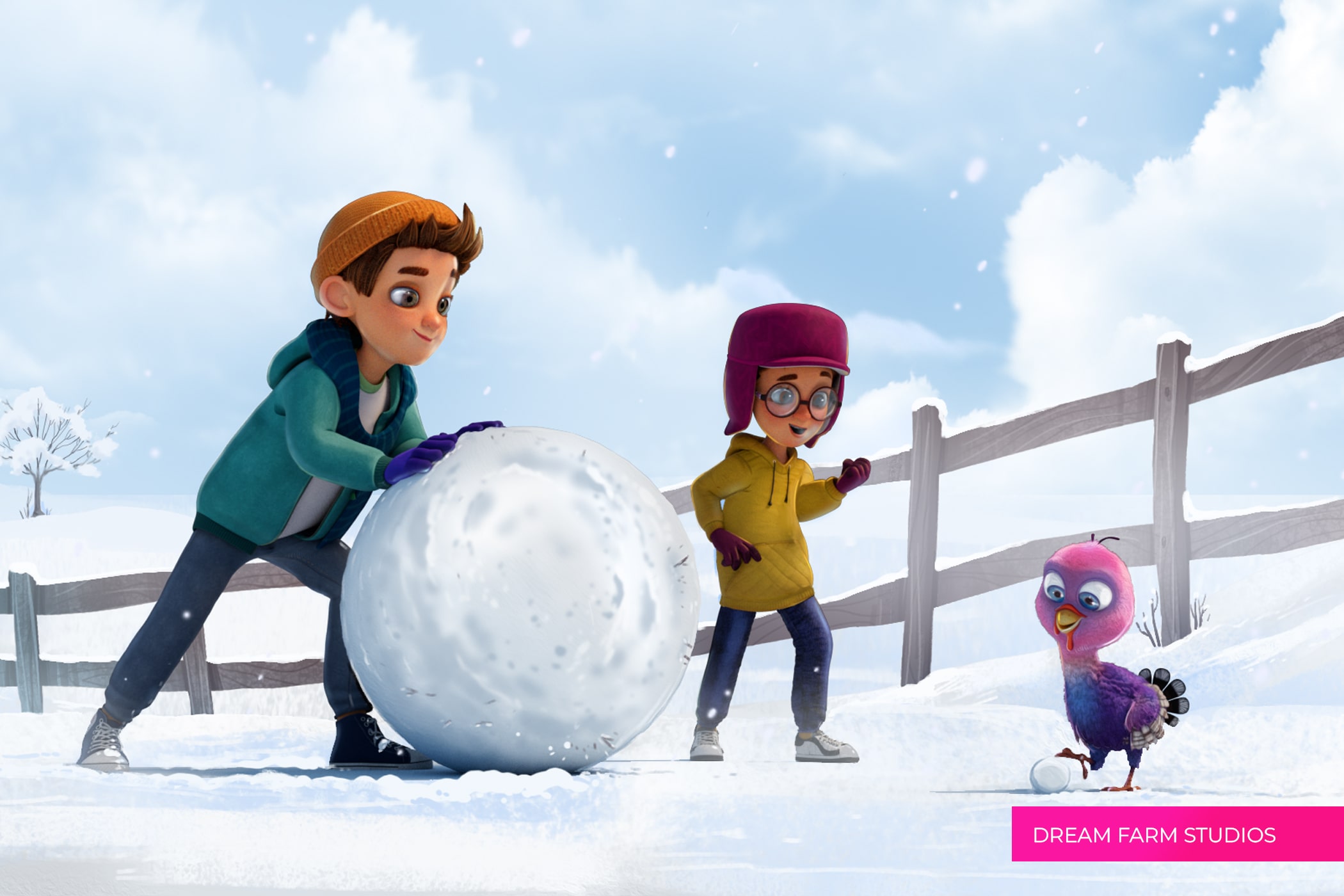 The Christmas spot is all about the balance

The PETA Christmas advert was to be created as a stylized animation. However, it wished to convey a message better suited to a realistic type. It was critical to design the character’s facial gestures and use the Squash and Stretch technique in a way to help Toby become more than just a cute character.

This was considered a big production and design challenge for the Dream Farm Studios’ team because, in stylized cartoon animations, the characters usually turn into merely funny and cute creatures, which may make them unable to convey the main message. Making the audience feel sympathetic and empathetic was much more crucial in this animated advert than making them laugh. Despite being sweet, Toby had to successfully express his fear and anxiety, especially in his escape moments. 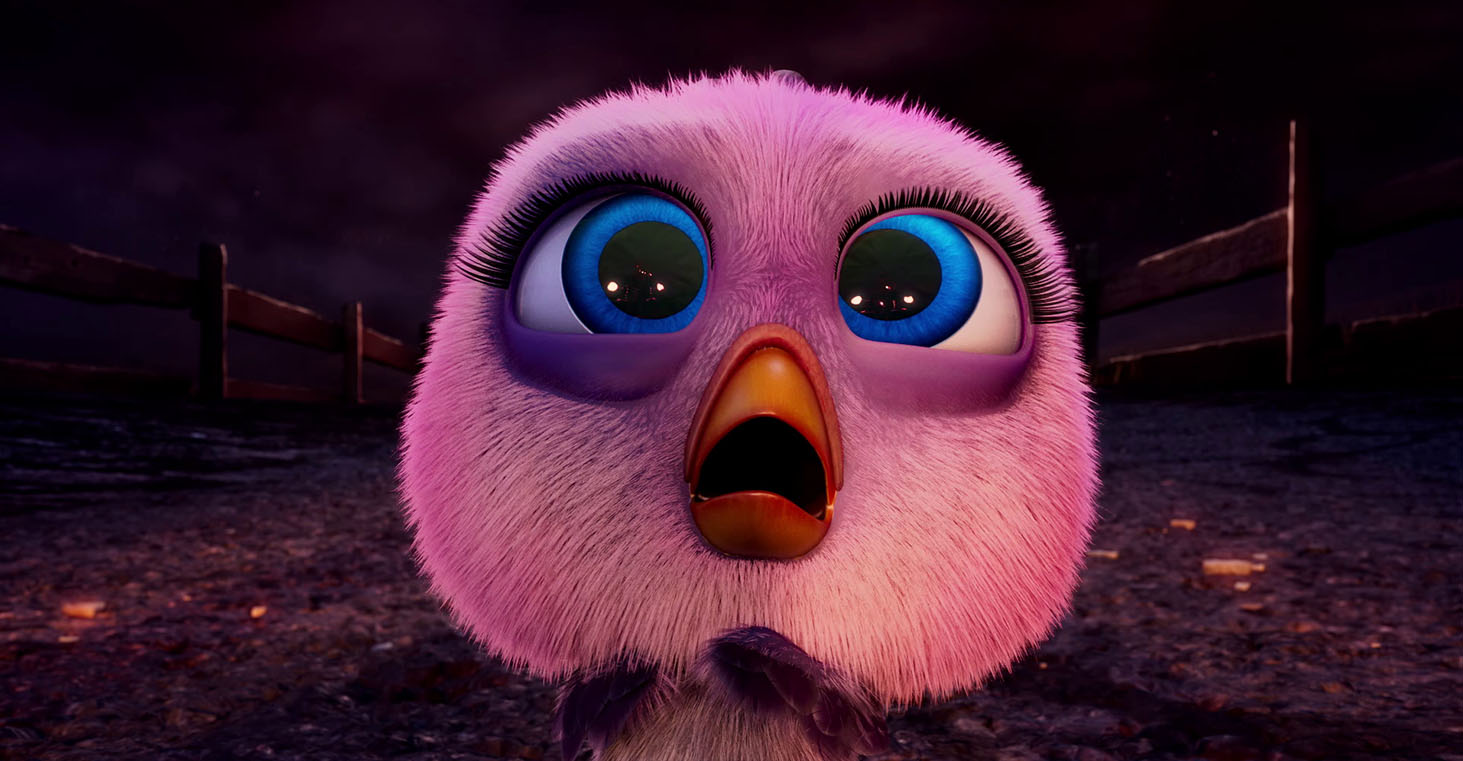 Make the audience feel “at home”

People are more likely to say yes to people they know and like— individuals who are similar to them, flatter them or have similar interests, according to Robert Cialdini’s Principles of Persuasion.

PETA and Dream Farm Studios needed a YES from the viewers. We wanted them to watch this video, think to themselves, and in the best case scenario, turn with the adverts and try a vegan meal this Christmas. For that to happen, we paid extra attention to the details.

We focused closely, particularly on the house’s design during this process. The home served as the setting for more than half of the animation’s scenes; thus, the atmosphere and the family members needed to give the audience a sense of familiarity and comfort.

We wanted to instill the feeling that a typical family is living in this house. This sense of intimacy would help create a more positive mindset, allowing us to eventually achieve our desired influence on the audience. 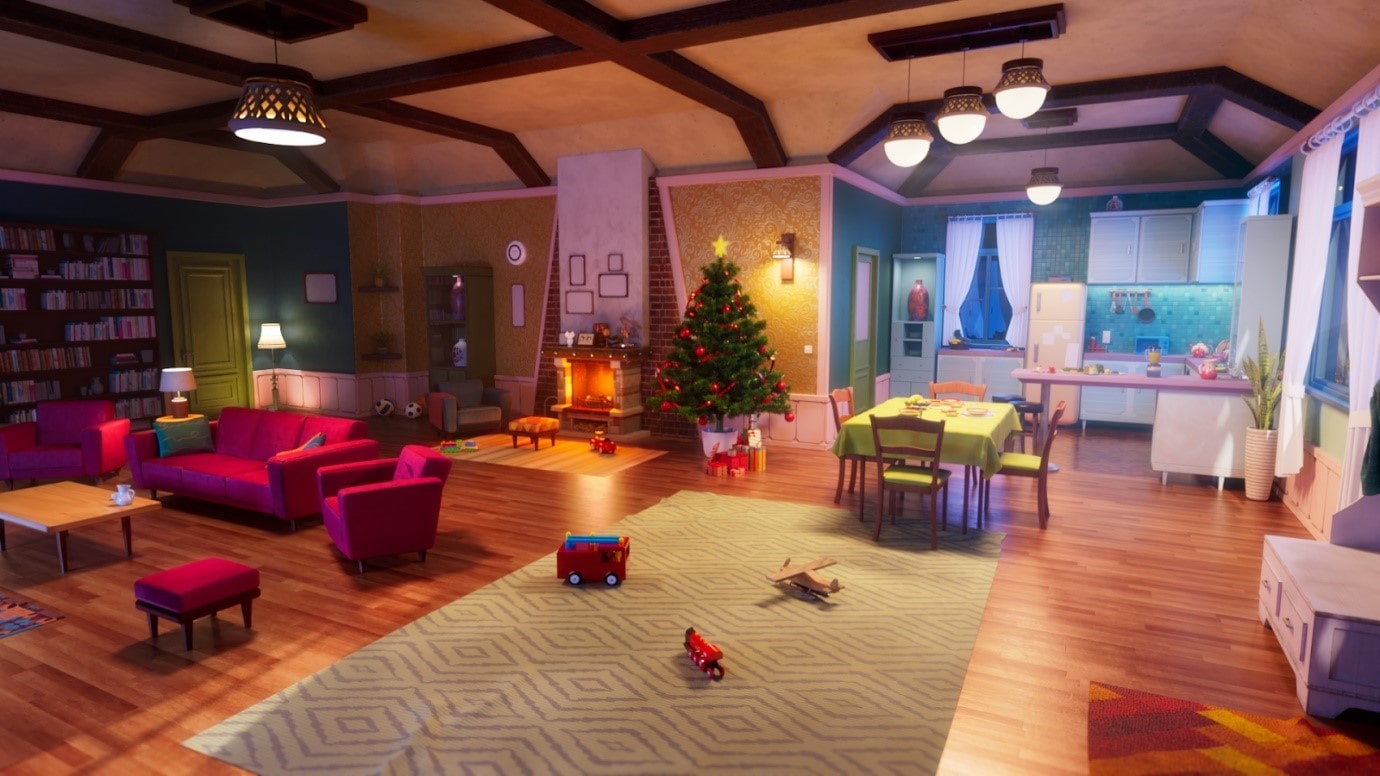 Unpredictability is what made it work

The sinusoidal rhythm of emotions and unpredictable storyline of this animation are further distinguishing features worth mentioning. Our team came up with the idea of creating breathtaking bookend scenes at the beginning and end of the video when mama Marta picks Toby up to support him. This was done to mesmerize the audience and give them a sense of unpredictability and surprise regarding the scenes that will come next. 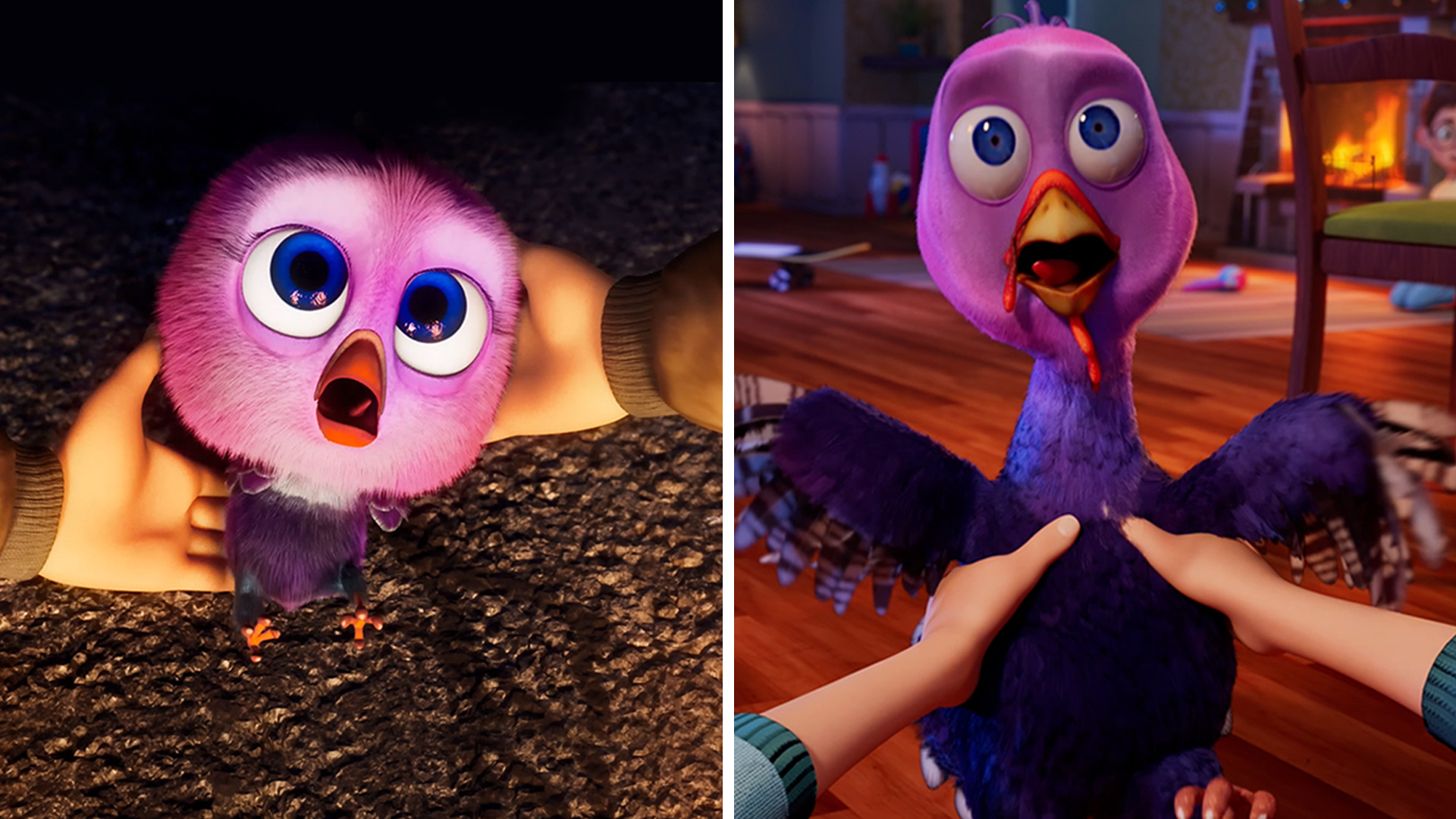 What are they going to do with him?

Are they going to EAT him as their Christmas meal? 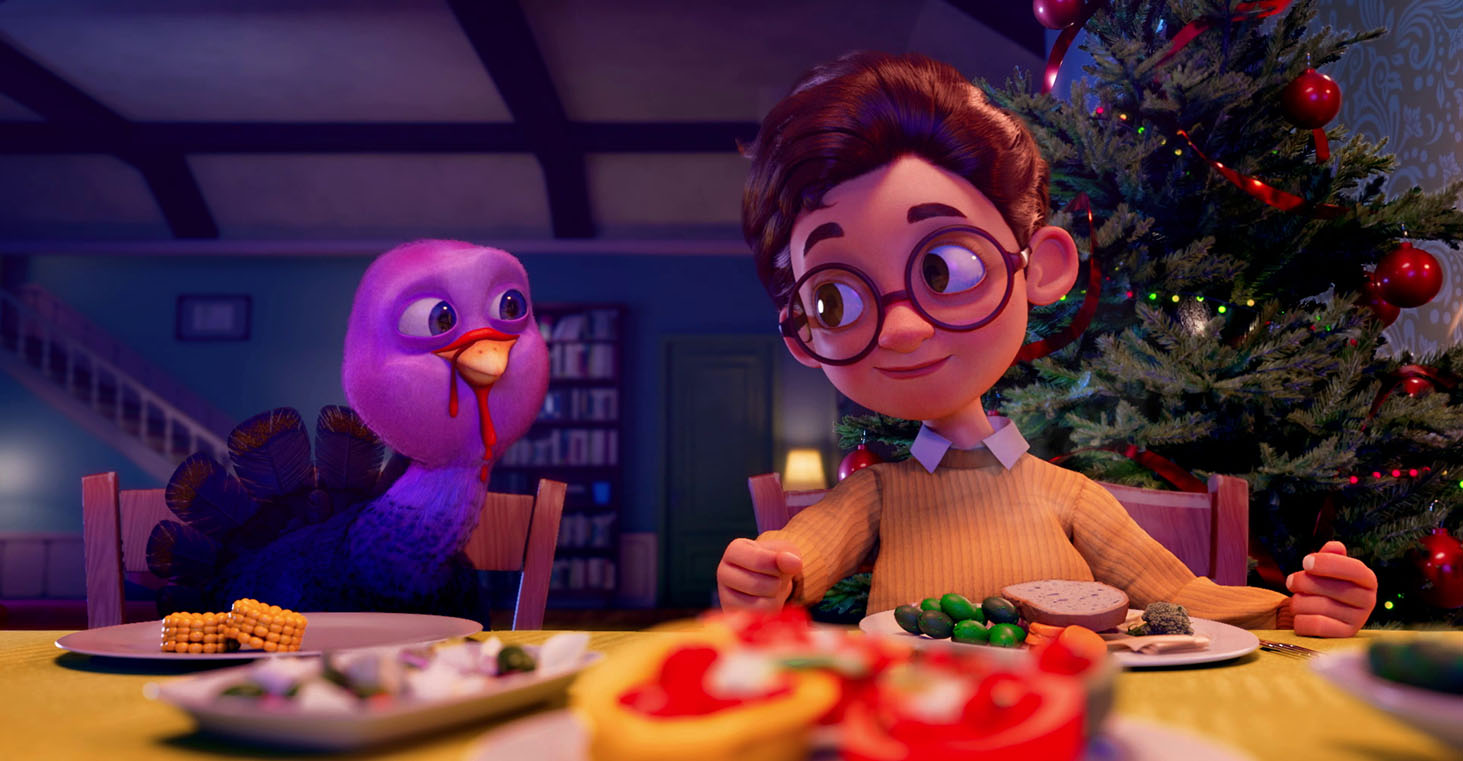 Toby got his seat at the dinner table… and in our hearts!

Despite all this, it cannot be denied that Toby was so adorable and lovely on his own and starred in a heartwarming story that made the entire world fall in LOVE with him.

It was heartening to learn that online newspapers like Independent, and DailyMail have covered his story and “the Christmas Spot” animation. Our optimism perceives this as an indication that humanity is more prepared than ever to respect animal rights and change its lifestyle.

We are also proud of our little Toby for what he did and wish you a merry Christmas. Well… a VEGAN Christmas! 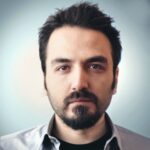 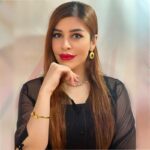