The process of creating a 3D animation is much more complex than most people think. The number of steps to produce a 3D animated piece can vary to a great extent, depending on the animation studio involved and the scale of the project itself.

But generally, a lengthy list of tasks must be checked in the 3d animation studio and a large group of people with different skill-sets must be engaged for a 3D animated video or feature film to be produced. In order to push such a complicated process forward efficiently and affordably, a solid structure and a detailed framework are needed: 3D animation pipeline.

What is an animation pipeline?

Animation workflow or pipeline is a system consisting of people, hardware, and software aligned to work in a specific sequential order to do pre-determined tasks in a pre-determined time frame, which will lead to a 3D animation product or asset as the final output.

The final product could be a traditional animation such as a feature film, short film, animated commercial video, television show, game trailer, or video game asset, or it could be something totally different. It’s much like an assembly line for 3D animated video production.

Here at Dream Farm Animation Studios, the following pipeline is used for the majority of 3D animation projects:

Based on organizational considerations, resources, outcomes, and other factors, each segment of the 3D animation industry uses the three stages a little differently, but the main structure remains intact. The specifics of each project’s pipeline may also be slightly different. However, the three main stages remain the same again.

1- What is pre-production in the animation pipeline?

Pre-production is the research, designing, and planning phase of the entire 3D project, which is split between two teams: The design team creates the idea, story, and designs, and the management team, who writes down the production plan (including budgets, teams, and time frames). The better the pre-production phase is done, the easier the production stage will be.

Pre-production consists of the following steps: 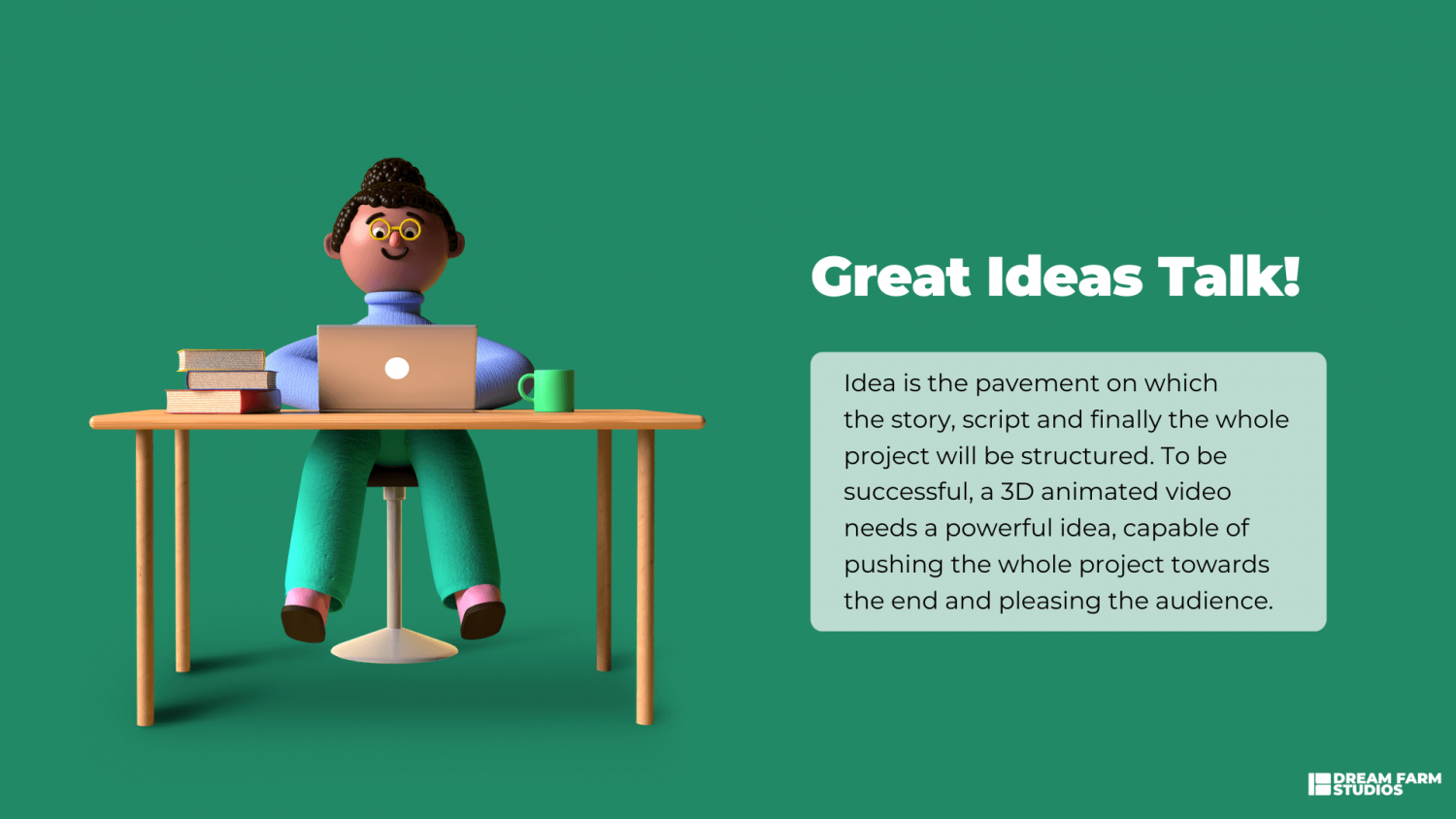 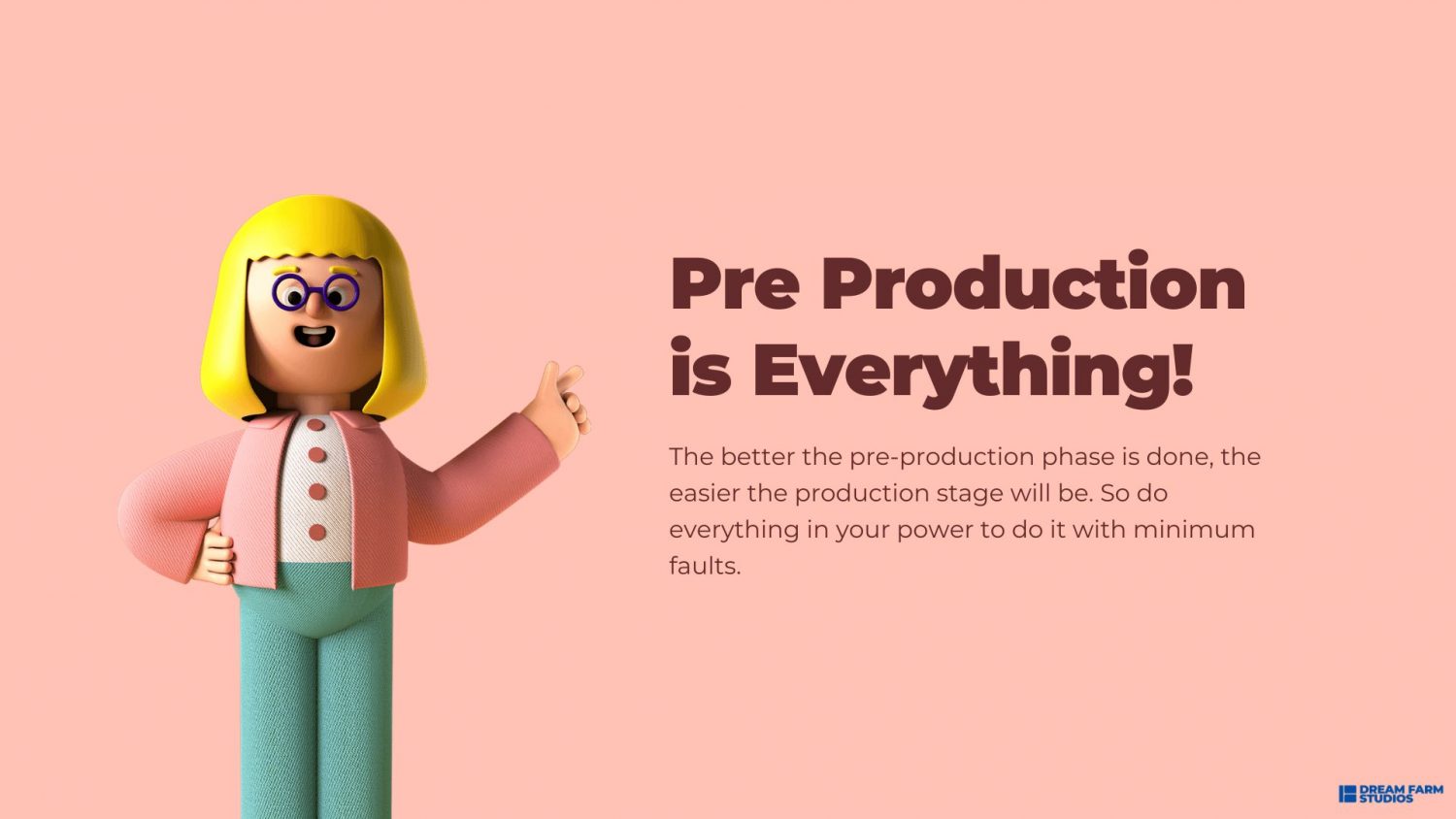 2- What is the 3D animation production process?

The production stage is where all previous efforts must pay off and transform into action. At this stage, visual elements of the 3D animation will be handed out to the designated teams and artists. Team leaders make sure time frames, and quality matches those of the determined plan in the pre-production stage and goes as smoothly as possible. The outcome of this stage shapes the entirety of the 3D animation.

The production stage consists of the following steps: 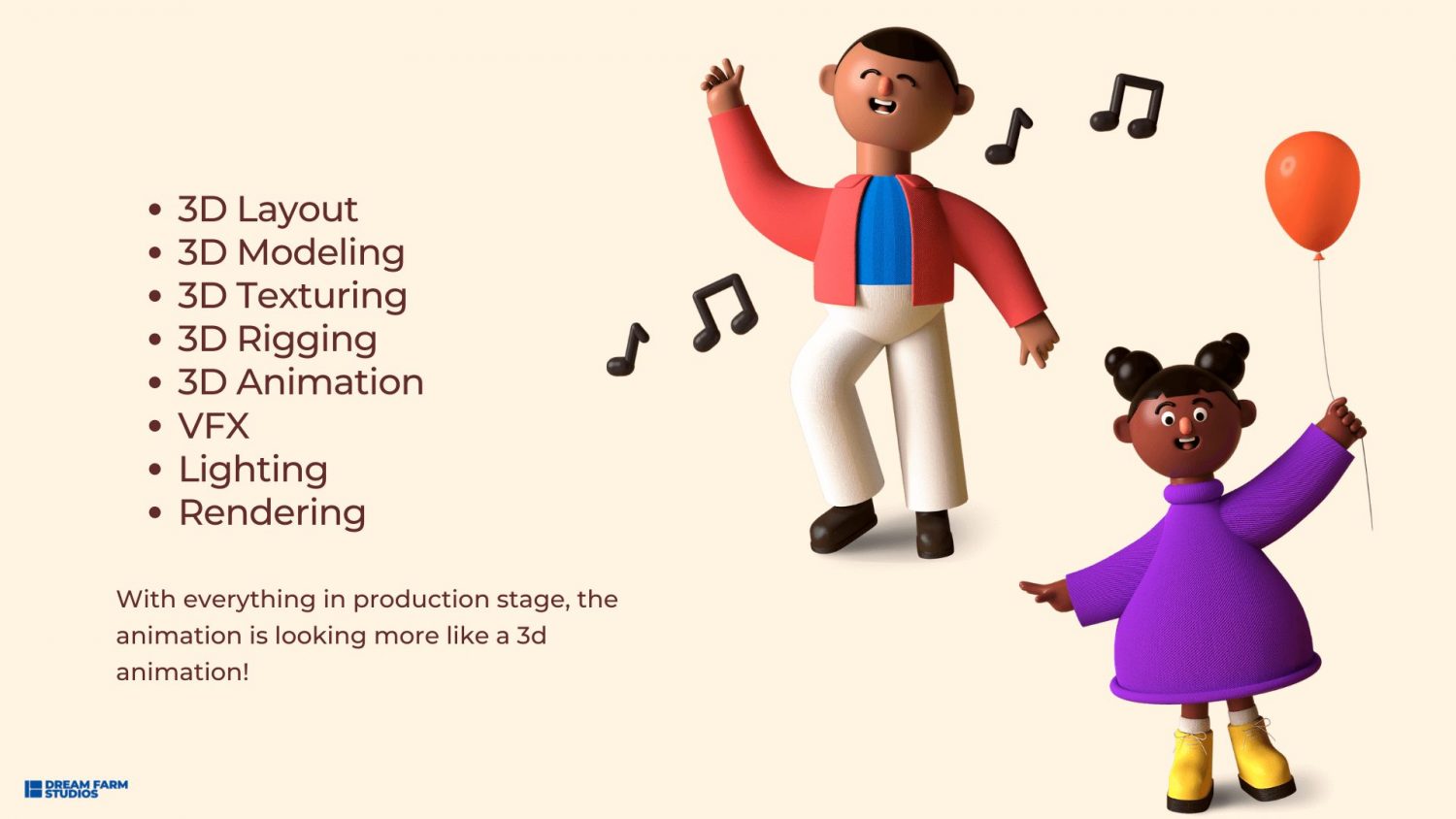 3- What is the animation post-production process? 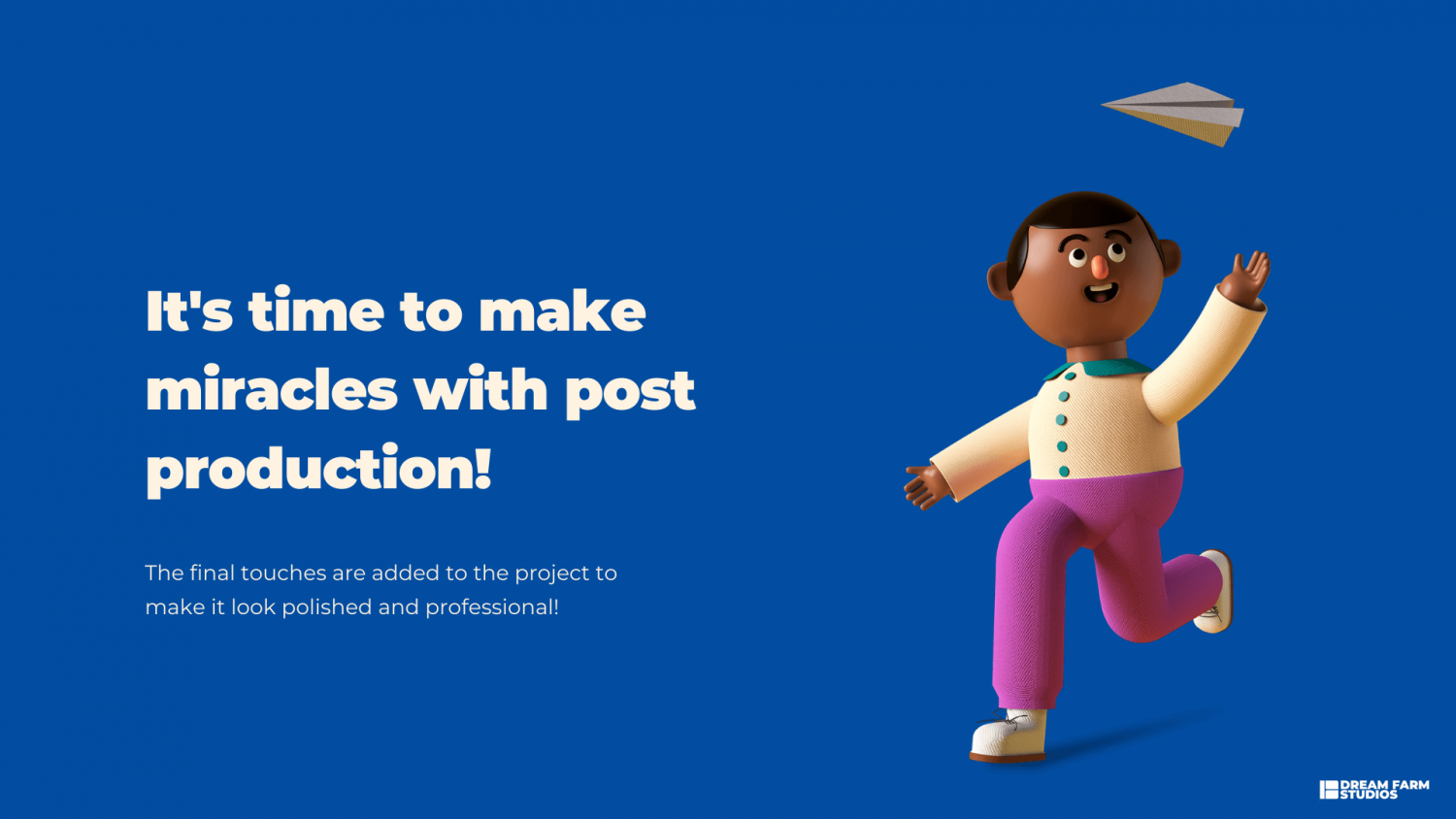 What is the difference between 3D animation and CGI pipeline?

CGI stands for Computer-generated imagery and is defined as using computer graphics to make or utilize images in art, game art, feature films, and series, TV series, commercials, etc. There’s no difference between CGI and 3D animation as both use the same techniques and methods to create and use art in different ways.

Why do we use a pipeline for 3D animation production?

You can picture the 3D animation pipeline as a creative assembly line in which everything is planned out, from conception to publishing. The entire pipeline might consist of as many as 500 artists or as few as 2. The most significant point of having a workflow in place is that every single one of these artists must know what, when and how exactly the tasks in hand should be done and handed out to the next artist or group of artists. 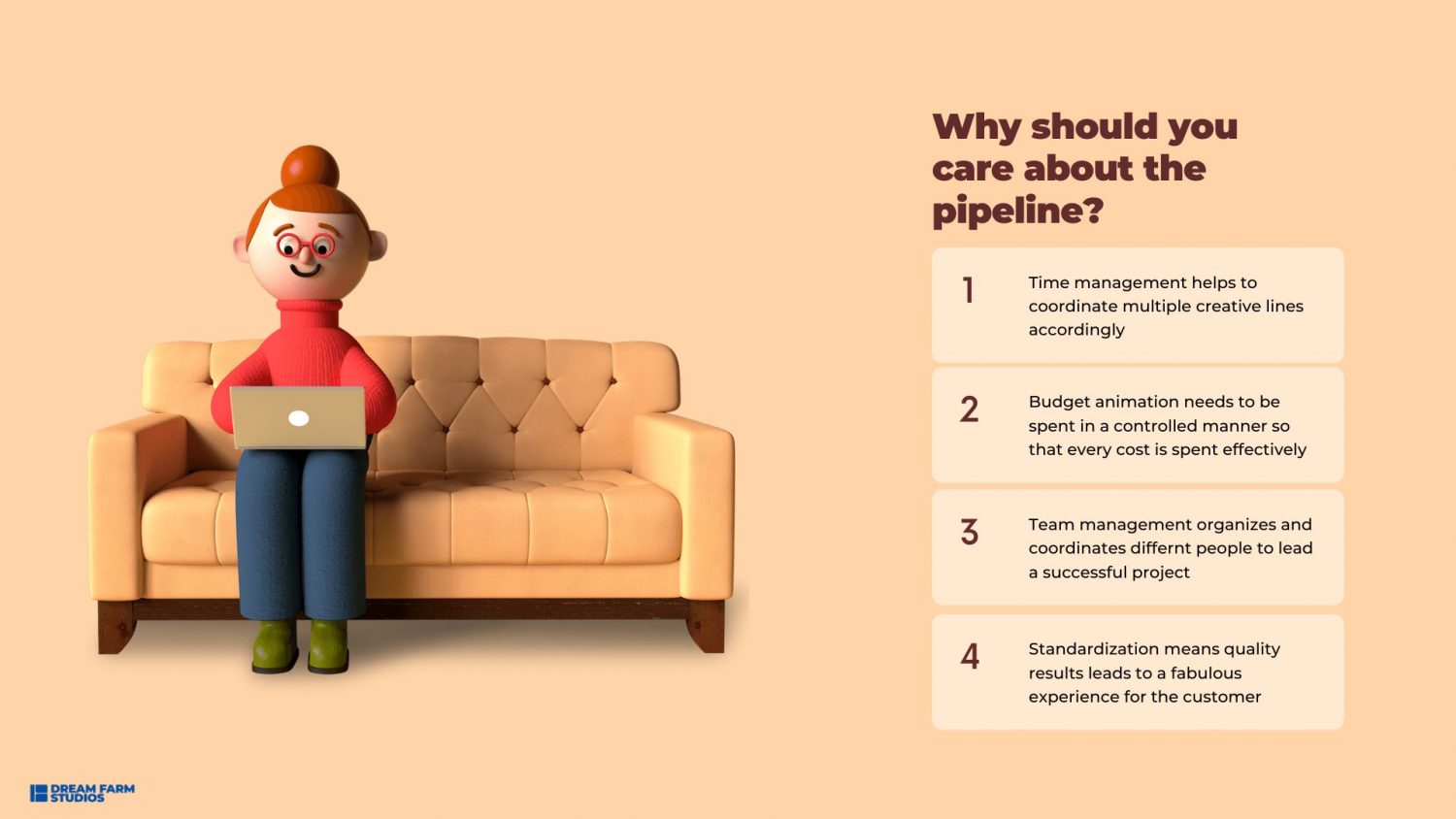 Generally, there are 4 main reasons for using a pipeline in 3D animation production:

How to get started in animation production (FAQ)

Let’s look at some of the questions that our readers have asked after reading our blog. We’ve listed the questions with short answers to get you going.

1. What do I need to get started in animation production?

The bare minimum is a mid-range computer (or something a bit beefier if you have your heart set on 3D animation) and some animation software plus a great deal of passion for learning animation.

2. Do you need to know how to draw to be a good animator?

Not necessarily but it certainly helps, especially if you’re working for a smaller studio where lots of jobs in the animation pipeline are your responsibility. Design, character creation, storyboarding and other artistic elements of putting an animation together will be impossible for you if you can barely cobble together a stick person.

3. How is animation a career?

It can be tough, isolating, competitive and repetitive, but that’s exactly why you need to have a passion and a love for what you do.
Animation is also immensely rewarding and inspiring. It gives you a chance to be creative and remain on the forefront of technological development; the people are amazing and with the entertainment industry, it’s always interesting.

4. How do you make a great animation portfolio?

Your portfolio is you. It represents who you are as an artist so it needs to contain your very best work and demonstrate your varied skills in a short amount of time. No pressure. Here’s our quick set of tips for creating an amazing animation demo reel:

Creating a 3D animation is a complicated process involving a lengthy list of tasks, a comprehensive set of hardware, and a large group of people with different skills and responsibilities. In order to keep the process flowing efficiently and affordably, a solid production workflow is needed.

A 3D animation pipeline is a system consisting of people, hardware, and software aligned to work in a specific sequential order to do pre-determined tasks in a pre-determined timeframe. Sticking to this procedure will lead to a 3D animation product or asset as the final output, such as a 3D feature film, short animation, television show, 3D video game asset, or else.

IF YOU HAVE ANY QUESTIONS REGARDING ANIMATION PIPELINE OR ANIAMTION AS A CAREER, DROPS US A COMMENT DOWN BELOW AND WE ADD IT HERE WITH AN ANSWER!

thanks for your great article, its so helpful!

I’m glad you liked it Kaveh! Make sure you come back again, I’ll keep producing more content and update the 3D pipeline article for nice folks like you!

Thank you Mauricio. I’m continuously updating our blog. Make sure you check on our new posts and leave comments more often! 😉

Hope you liked it Aaron 🙂

I would very much appreciate your informative article. Is it possible that we outsource the pre production stage of a 3d animation to a company and then we take care of the rest?

Thrilled to hear that. Thank you Mona

thanks for all your efforts to make this guidings ,it`s so helpfull for a begginer.

Thank you very much Riddhi, always keep checking out our blog for more educational stuff.

Great break down and easy to understand materials. Please write about each part of the pipeline separately.

A lot of animation studios neglect the use of traditional CGI pipeline and instead try to come up with their own workflow. What do you think is the result of such action? Is it ok to skip some parts of the traditional pipeline?

thanks for your great article, its so helpful!

Thank you very much hninhnin, check out our other articles too.

One of the best guides for absolute beginners who are trying to find a career that compliments their passion for film, technology, design, coding, and digital art. very informative! This blog will give you a good overview of the animation industry and the career prospects available to you. so, It’s really up to us, how we need to take the next step using the advice provided in this guide.

Thanks. Check out our other articles.

This is absolutely one of the best articles I’ve come across about animation production pipeline.

Can i know where can i find these kind of 3d animation pipeline on canva pro. I want the keyword to find these

Hi there Palak, I’ll ask our design team about the source of the images but I guess they’ve made some adjustments and refinings too.

Thank you very much Rnw, feel free to check out our other blog posts 🙂

Hello there, I´m a student of network and computer systems administration and working on a small project. Its about how I would install a network for an animation studio theoretically. This blog has been really usefull till now, thank you. I do have a question though, how many devices are needed for each step of the pipeline? I know it must vary a lot from studio to studio, so in your studios case how many computers are there working in each process?

Hi there David, thank you for your attention. We’re happy to be a part of your valuable project. In the case of devices required for animation, in most cases, each step of the process needs one device. However, it depends on the scale of the project.

Great article thanks a lot

Thx a lot Tony, really appreciate it. If you liked this article, you might like our 2d animation production workflow too.

Helpful and very interesting article. Great to add more knowledge about 3D animation. Thanks for sharing this.

Thank you for letting us know FarageFarm. If you’re interested, check out our complete guide on 2d animation pipeline.

The way of writing about this blog is Impressive!

Hi, This is a really informative article and has helped me to understand the process a lot more. My main question would be, how long does a 1 minute medium complexity animation take from start to finish?

Hi Nathan, thanks for dropping by. making a 3d animation could range from a few hours to several days or months depending on the subject matter and complexity of the animation. However, To give you a rough idea, A complex fight scene or another detailed scenario (crowd running, castle siege, etc) involving multiple characters, you could be looking at a couple of days, if not weeks or months, depending once again on the design and style of the characters and overall animation.

Very informative and useful writing. I benefited a lot.

Great blog, but voice over wasn’t mentioned here. Do you record the voices before animation, or animate before recording

I find this blog very informative, keep up the good work.

Thanks for the valuable information. I would like to know, configuration of the computer to run, use practice 3D modeling in blender software?

Thanks for sharing such a good concept which you present it’s really good and understanding for everyone. I am a new person in the animation field so that is why I join Merciless Nature they educate me on all types of animation so can you check out for me and guide me its good and not waiting for you response

This blog is very helpful and thank you for provide infromation.

This is a great guide for rookies, when I was starting I had a very poor budget and time management… in the ended up using a tool that is promoted a lot in the 3d field, a render farm.

On a side note, have you thought about doing an article comparing the best ones to use? I mean I’m currently using https://rebusfarm.net/ and I’m really happy with it but I just want to read what else is there

Hey Amaya. Thanks for your comment! So glad you liked the article and it helped you! ✌😉

Excellent explanation of this complicated process. Very complete and clear. Thank you!

Makes us proud to know, Muriel! 🙏✨