What is 3D rigging? how to do it in 4 steps + best softwares

As Brian Green, rigging technical director of Pixar, defined, “rigging is the process of adding control to a digital model.” In this short guide, we talk about everything you should know about the process of rigging, from doing it to the best software and the job of a 3D rigging artist.

What is 3D rigging?

Rigging is also known as skeleton animation, a technique for defining the range of action and gestures of a 3D model character. Rigging artists implement this technique by using a series of interconnected bones. The most crucial point you should consider is that rigging is not a unique feature just for human models; you can rig any object with an action. The most amazing examples are the galaxy, buildings, or even the Pixar lamp, which are among the first 3D models of rigged objects.

To simplify the description of the rigging process in the animation production workflow, we divided it into four main compositions:

1.The first one is called skinning or mesh. It starts by constructing a series of bones that represent models’ skeleton (polygonal geometry). It begins by creating and setting bones and joints that represent as an armature the model. Then, the skin meshes to the bones.

2.The second is creating controllers. For controlling the effects of every part of the model’s movement and helping animators understand the function of controllers, they represent different geometrical shapes. Some of these shapes defined:

Now, We’ve completed the process of designing the skeleton. After that, the character rigger should add movement patterns and facial gestures to the model. The relationship between the bones in every movement is hierarchical, like the parent-child relationship. If you want to move a 3D model character’s shoulder, its hand and forearm bones also move. This connection simplifies rigging because the character rigger does not need to define actions for every little part of a model.

3. The third is joints which are different from the joint that we mentioned in step one. Joints define the limitation of models in movement, and another point that is important in this step is weight painting. The interaction of every part of the 3D model depends on the weight scale. It means that how much a part’s weight influences a bone in movement is essential in the model’s realistic and natural physiologic rigging.

Most software programs have an auto-weight-painting mode like Blender. They are designed based on this theory that most characters follow the same limited pattern of the skeleton. Although, for perfect rigging, it is necessary to tune the weight of each bone.

4.The fourth is Forward and Inverse Kinematics. As mentioned above, the relationship between the bones is hierarchical. It means that action in the upper parts of a model also affects the lower regions, known as forwarding kinematics. On the other side, if lower parts are animated independently from the upper parts, it is called inverse kinematics. The process of animation can be more straightforward by IK.

What does a character rigger do?

A character rigger designs the skeleton’s framework of 3D computer-generated (CG) models, and they define their movement limitations for the next step of the animation pipeline, which is to animate.

Riggers work on the characters that modelers designed. After the design of the skeleton and network of movement, animators test rigs. Following the fixes of animators’ improvement edits, the rigging section will complete.

How do you become a character rigger?

Every passionate character designer can end up working in a 3D animation studio, but you can call yourself a professional character rigger by mastering the following skills:

How much is a character rigger salary?

What are the best 3D Rigging Software Programs?

There are many software programs for 3D rigging, and each of them has some unique options and features. 3D rigging artists prefer to work with multiple programs, and the most popular combination of them in Photoshop, ZBrush, and Maya creates fantastic results. All the following software programs have Skeleton animation functionality such as Maya, Blender, 3Ds Max, Modo, ZBrush, Cinema 4D, and Houdini.

Most game developers and animation studios are the first choices of Maya and 3D Studio Max because they are the industry standard for 3D modeling.

The option that makes Blender popular is that it is free. Blender has all the necessary rigging processes but not as professional as Maya or 3D Studio Max. 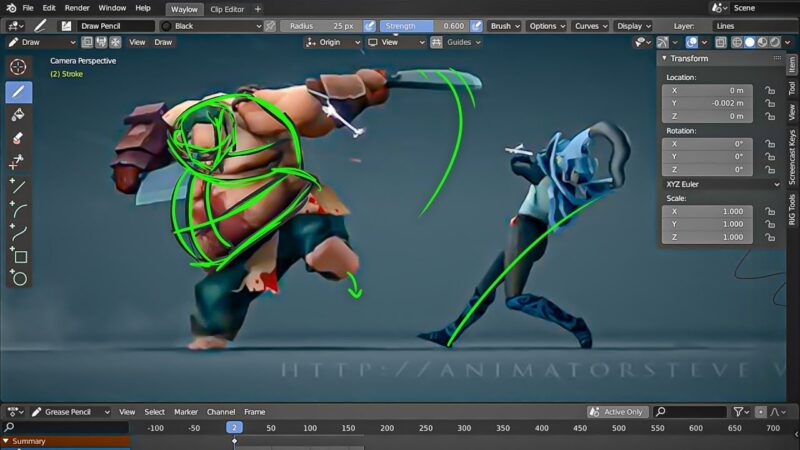 Other rigging software for rigging you should know

Some of the rigging software, such as Moka Studio, has a technology of real-time motion capturing that can lead to faster development and much more realistic output.

Mixamo is an excellent choice for entering the world of 3D modeling and rigging. It has an automated rigging and weight painting process. Toon Boom can also be a good choice for beginners and also for experienced animators. It offers features and tools not only for rigging but also for animation and drawing.

If you are not a character rigger or cannot employ a rigger expert for your project, you can use MakeHuman to create humanoid characters. It has a wide range of figures that you can customize, and after finalizing the model, it can rig the model for you.

A wide range of different software programs exists for rigging and modeling; it depends on your needs to choose which one or multiple of them for your projects. Specialists in rigging are familiar with most software programs of their field because the combination of software features can make a fantastic professional output.