Pre-Production
Production
Post Production
As the three final stages of the 3D animation production phase, 3D VFX, lighting, and rendering are closely tied together; among which lighting has a substantial impact. 3D Lighting is one of the most important elements of any visual representation. Lighting in 3D animation is much like lighting in photography or filmmaking. The lighting artist sets up a combination of light sources to either draw attention to a special part of the setting, set the overall mood of the scene, or represent the natural properties of the scene such as time of the day.

The role of 3D lighting can be of even more significance in 3D commercials, product visualizations, or hyper-realistic 3D animations. The lighting artist can significantly bring out various details of the objects; everything looks unappealing and boring without proper lighting.

But before that, here’s a fast-forward video of different stages of lighting in our latest animation project:

What is 3D lighting?

3D Lighting is the collection of tools and techniques used to simulate light in a computer-generated 3D environment. 3D Lighting techniques offer a huge amount of flexibility regarding the level of detail and functionality. They also operate at different levels of complexity. Lighting artists can choose from a variety of light sources, effects, tools, and techniques that suit their needs.

Just like photography or filming, the lighting stage of the 3D animation pipeline is all about making a 3D scene or sequence visible in a specific way through setting up different sources of light. Lighting is especially important in a 3D animation because it must support the story, convey the mood of a shot and also visually depict the location, time of day, and even the weather convincingly.

These factors have a much heavier weight when it comes to longer projects. Creating a consistent lighting scheme across the entirety of a 3D feature film or television show is one of the biggest challenges the lighting department of a 3D animation studio will be up to.

The kind of light we see around us in the real world is in fact a complex combination of ambient light plus different additional light sources. A huge part of the light we see every day is the actual light from a distant burning star illuminating our sky and bouncing countless times in the environment. That’s why out of direct light, objects are rarely completely dark.

High-end rendering engines, produce high-quality ambient lighting that can create extremely convincing scenes. Standard rendering engines however create a somehow similar effect by adding a lighting value to all the pixels in the image. Global Illumination (GI) and Skydome are two of the most used algorithms used in 3D animation studios like Dream Farm for creating convincing ambient lighting in 3D environments.

Skydome Lighting: Skydome is an effective tool to simulate light from a dome above the scene; representing the sky. It can even be used with HDR images to perform image-based lighting too. Skydome is mostly used for outdoor scenes but can also be implemented for indoor scenes when needed. 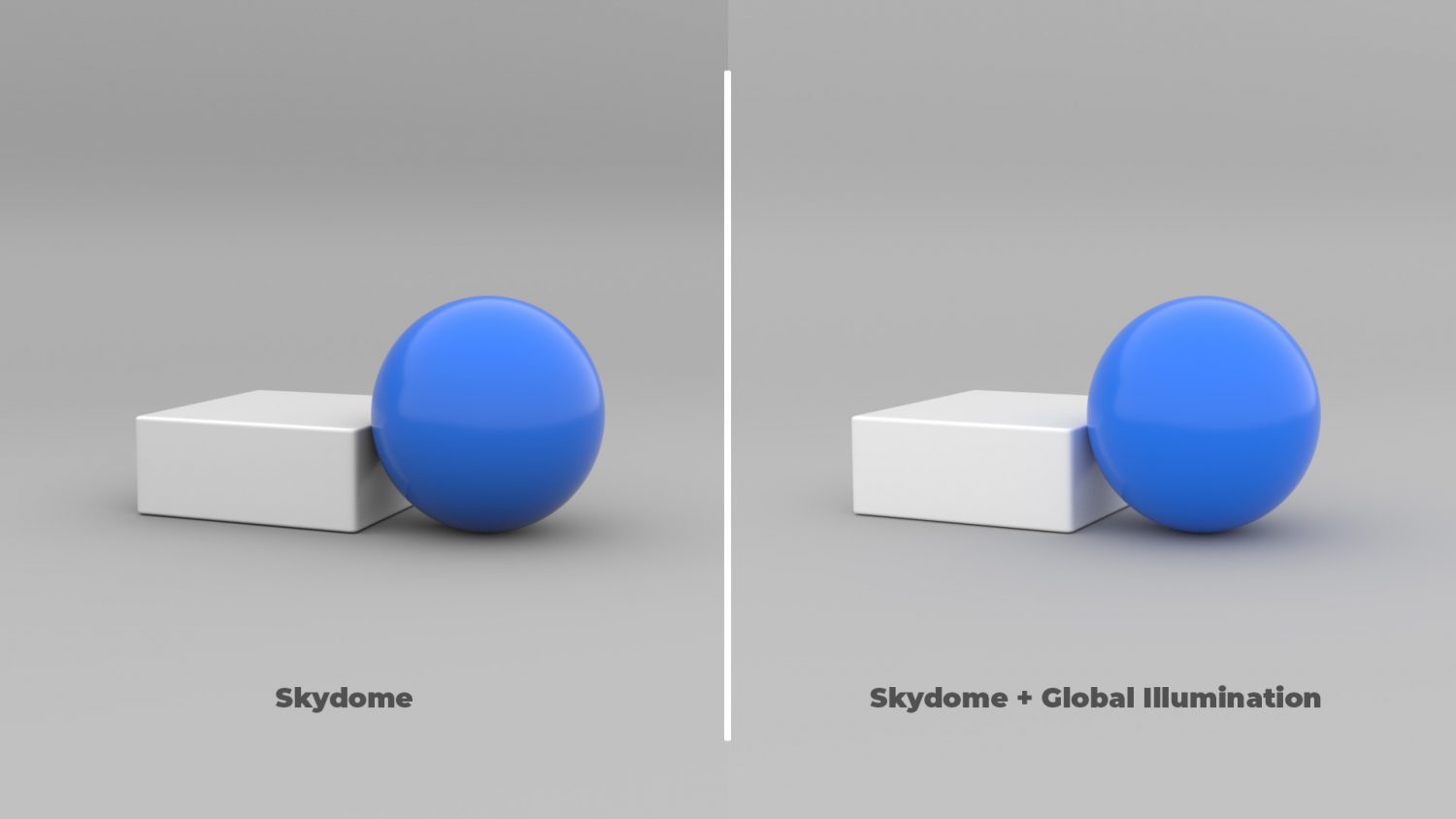 Different types of light sources can be used in combination with these two. Take a quick look at some of them to better understand the unique properties and potentials of each; combined with GI and Skydome. Experimenting with these tools and techniques can take you to a point where you can effectively simulate the real-world lighting in a virtual environment: 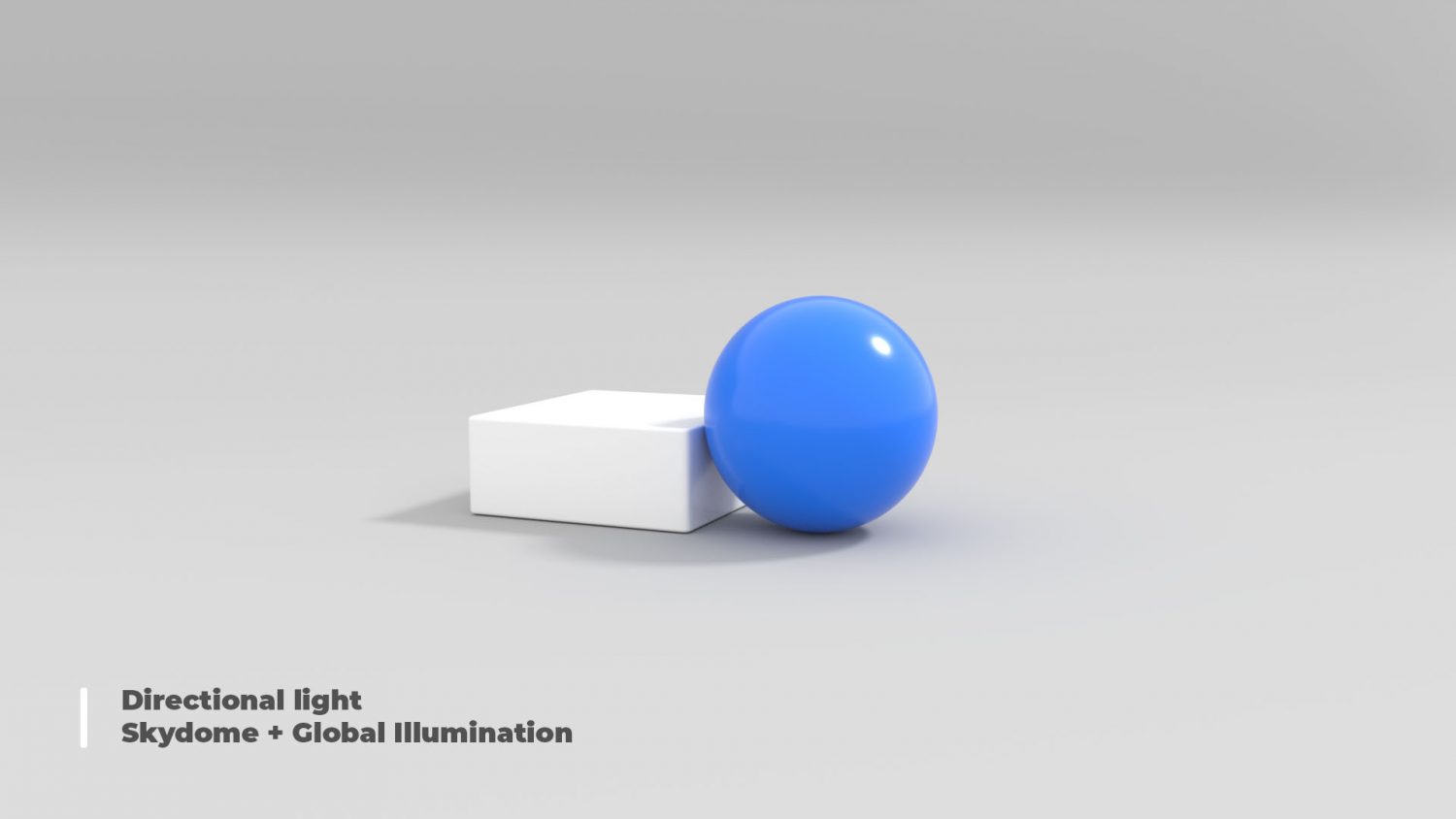 A directional light (also known as infinite light) is great for simulating the sun or moonlight because the light it creates travels in parallel rays; like a faraway light source. This light source strikes the polygons in the scene with equal intensity. 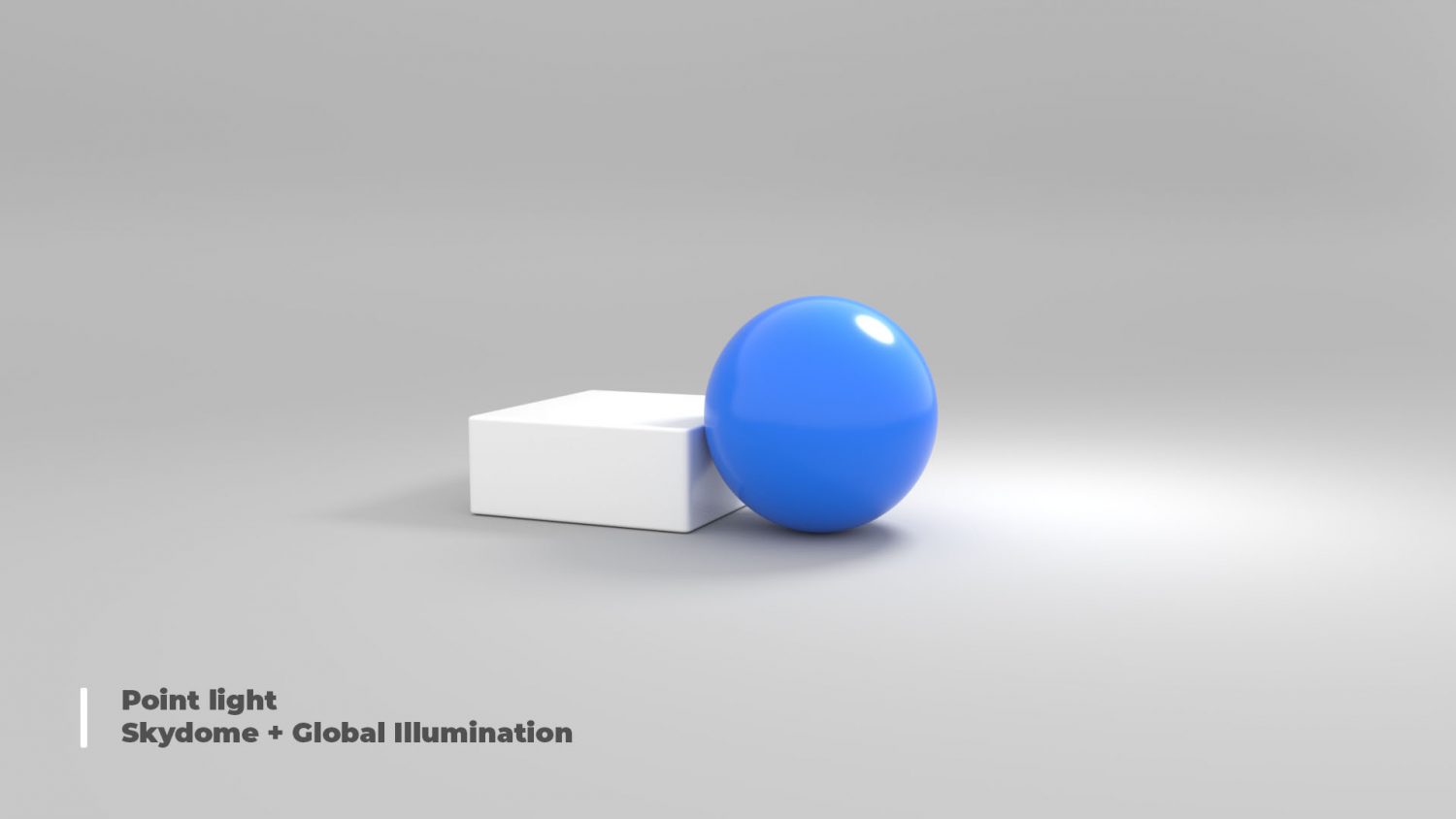 Point light (also known as Omni light), emits light from a single small point, in all directions. It is often used to create fill light because it has no specific shape or size. The closer the object is to the light source, the brighter it appears. A light bulb is an example of Omni/point lights in the real world. 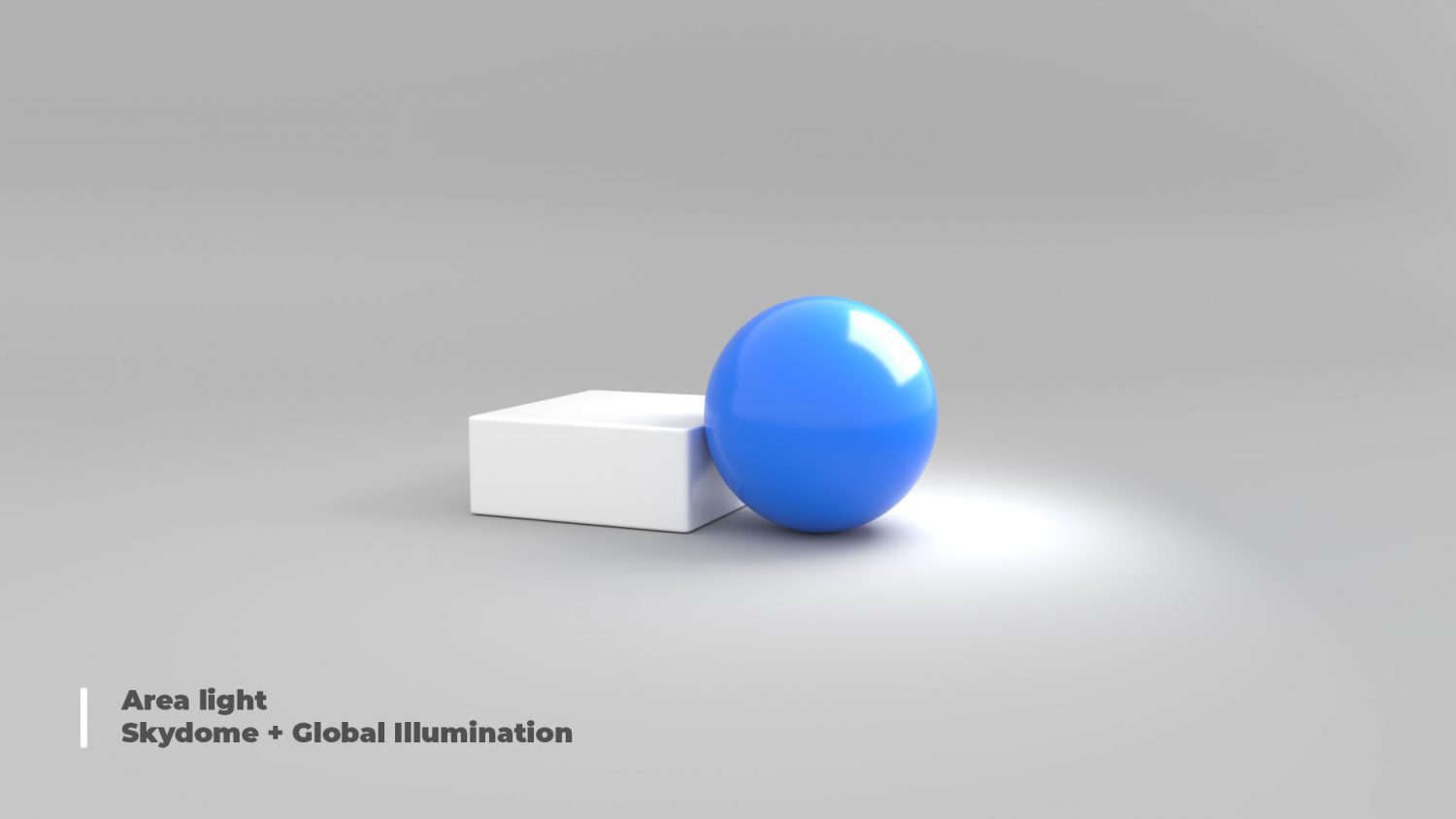 An area light emits light from a specified surface with a specific shape and size; such as a window, fluorescent light fixture, or back-lit panel. In other words, an area light is a physically-based light that casts directional rays from within a specified boundary; creating soft and realistic shadows. These properties make it a popular choice in product lighting or architectural visualization. Area lights do have an overall direction, but they don’t emit parallel rays like directional light. 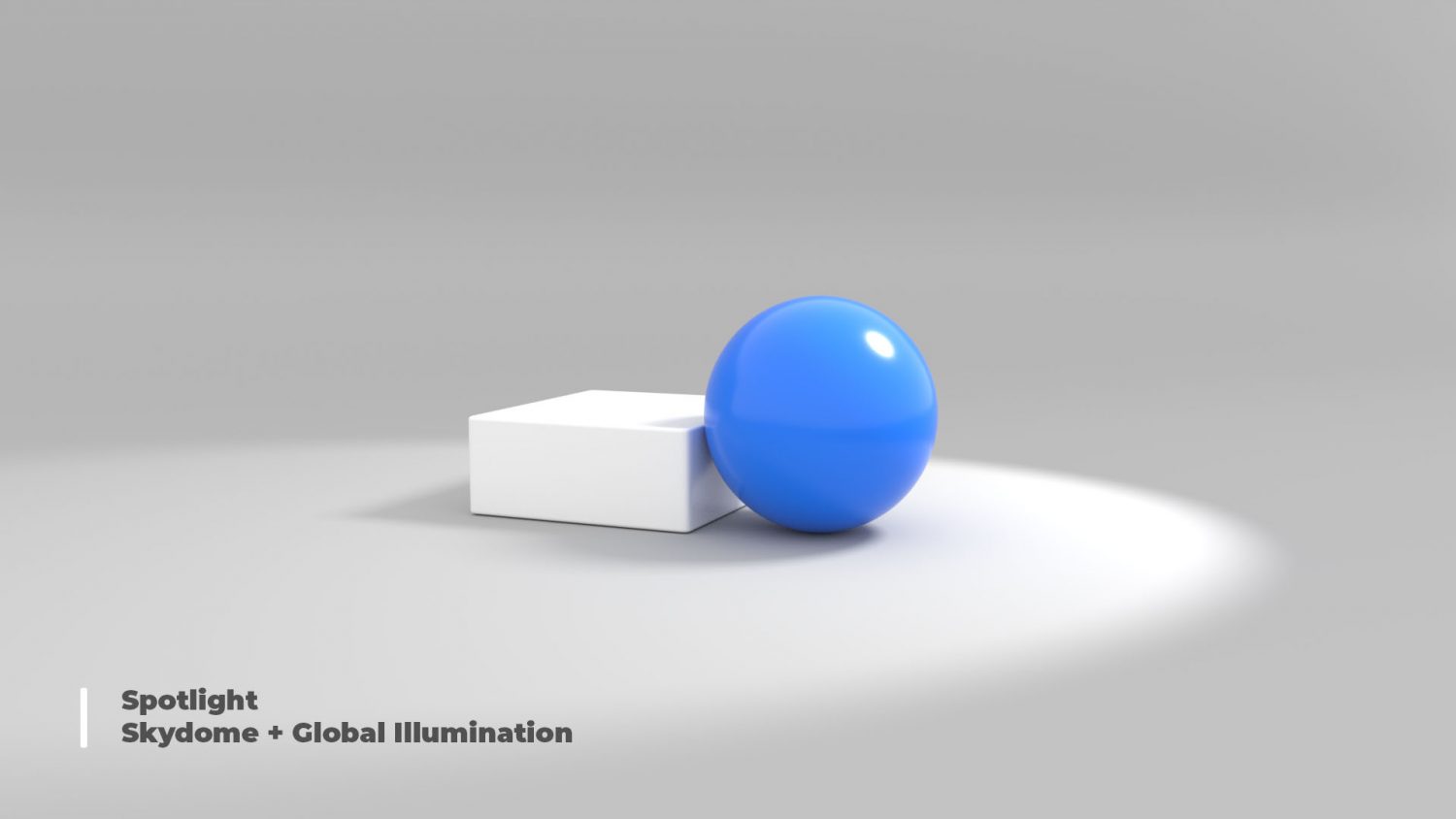 A very popular category of lights in any 3D animation software in the spotlight. A spotlight produces a cone of light in a single direction; with the light getting more intense closer to the source and to the center of the cone. The lighting artist can control the cone angle, determine the size of the light or soften the outside edge of the cone to create different looks. A flashlight is an obvious example of spotlights in the real world.

Three-point lighting is probably the most common one, which obviously uses three light sources:

Two-point lighting is most similar to what we see every day: A primary source of light (the sunlight) and a second light surrounding it (sky’s ambient lighting).

The one-point lighting setup has only one light source without any complementary one to fill the shadows. This is an extreme technique used to create a very dramatic effect.

How do you become a 3D lighting artist?

Lighting is an important element for any 3D animation. 3D animation lighting professionals are very similar to film lighting artists and artistic painters. They must be able to create a specific mood in a shot or sequence or show every detail of an object by lighting.

The 3D lighting artist is also responsible for the coherence of the lights on each sequence and the whole 3D animation; especially in bigger productions. Once productions reach a certain size, quality and time factors make it impossible for animation studios to produce full projects by 3D generalists. That’s why bigger 3D animation studios diversify their CG workforce into professional teams consisting of dedicated modelers, riggers, animators, texture artists, and lighting professionals.

It will be important for a 3D lighting artist to pick software such as Autodesk Maya and master it. Their knowledge and experience in whichever software they use to light up the characters and sets should be used to contribute to the 3D animation’s atmosphere. But it won’t be enough. They must understand how light behaves and have a comprehensive knowledge of light, color and how different materials or textures work under different types of light.

To learn more about texturing, check out our article about 3d texturing in animation.

Check out our article about character color theory where we talk about the ins and outs of making the character look perfect by color theory best practices.

After all, the technique is fundamental for a 3D lighting professional, but artistic sense and creativity are also needed. These qualities combined with adequate practice, make a specialized lighting artist incredibly valuable to any 3D animation studio.

3D lighting is an important aspect of every 3D animation project. This is the process in which the light sources of the 3D environment, shades, shadows, and reflections are created. 3D animation lighting is much like photography or film: A combination of light sources to either draw attention to a special part of the setting set the overall mood of the scene or represent natural properties such as time of the day or even weather.

The next step in the 3D animation pipeline would be 3D rendering. As mentioned before, 3D VFX, lighting, and rendering are closely tied to one another and might require multiple revisions to work best together. Therefore it is essential for a 3D animation studio to create a proper relationship between professional teams.

Thank you very much for your detailed guide for 3d lighting.

So glad to hear that Johnny. Hope it helped you gain more perspective on the subject matter.

I’m an aspiring 3d lighting artist and I found a lot of value in your blog post. Thank you very much.

Thank you, Emilia, it’s a pleasure.

I really like the video, can I watch I watch in full pace?

I think what makes 3d lighting job so interesting is that they are the ones who can change the mood of an animation. Whether they want to make the scene look violent or childish, it’s the colors that have a big impact.

Wow, Such a great point of view. We never thought of it like that.

Hi, I am an aspiring lighting artist, firstly thank you so much for the blog it has been very helpful for me to start with the journey to be a lighting artist, it would be very thankful of you if you could please guide in how to go ahead with the learning and what all things to keep in mind.

Hi there Nupur, glad you liked our post. You can take a look at our animation pipeline guide and go to other topics from there.