Pre-production consists of these main steps: idea generation, story creation, scriptwriting, storyboarding, animatic and design. Among these, Animation Storyboard is a pivotal step in which the script is translated into visuals for further development. In fact, it is the first visual representation of the script. This step should never be skipped in an animation studio.

In this article, we are going to take a look at the fundamentals of 3D animation storyboarding and Dream Farm’s approach to the subject.

If you’re here just to see an actual storyboard in practice, Below is an example of a storyboarding animation we made for our latest project. If you want to learn how to make storyboard animation, read on.

What is a storyboard in animation?

After you come up with a great idea, shape a story, and turn it into a script, it’s time for making a storyboard. A storyboard is essentially a series of drawings based on the script, which will be used as a visual guide throughout the rest of the animation production pipeline.

Early ideas of camera staging, transitions, possible visual effects to enhance each shot, audio notes and some key character poses or scene events are among the elements included in a storyboard. It is an essential tool for the whole team to get a sense of how the final animation is going to look and feel.

Bigger productions such as feature films or animation studios with numerous artists on board will need to have a fully developed final storyboard to step into the production stage. A fully realized storyboard will tie together all of the next production steps.

Take a look at our guide on what is 2D animation process to see how storyboards are used in real production scenarios.

Cartoon storyboard, How it all started!

It is said that storyboards as we know them today, was developed at the Walt Disney studio during the early 1930s; evolved from “story sketches” created in the 1920s to illustrate concepts for short cartoons. The first complete storyboards were reportedly created for the 1933 Disney short called “Three Little Pigs”.

Animator Webb Smith was apparently credited by Disney for coming up with the idea. He used to draw scenes on separate sheets of paper and pin them up on a bulletin board to tell a story in sequence; which in fact shaped the very first version of storyboarding. Within a few years, the idea spread to other studios as well. By 1938, all American animation studios followed suit and used storyboards in their productions.

However, animation storyboard is by no means exclusive to the animation industries; even large-budget silent films were storyboarded at the time. Special effects pioneer Georges Méliès is known to have been among the first filmmakers to use storyboards and pre-production art.

Gone with the Wind (1939) was one of the first live-action films to be completely storyboarded. During the early 1940s, the art of making a storyboard became popular in live-action film production and grew into a standard medium for pre-visualization. Today, it is an indispensable part of the pre-production process for both live-action and animation production.

How to make a storyboard for animation

All in all, there are two main approaches towards 3D animation storyboards:

Back in the old days of animation, directors would come up with a basic story and start to storyboard their ideas and turn them into actions without writing a script first. However, that approach is not recommended today; especially for 3D animation.

The size of productions and the vast possibilities that 3D animation has opened up leaves a huge gap for interpretations that will end up wasting the project’s resources eventually.

On the other hand, smaller productions with limited resources or smaller teams might find it easier to skip the scriptwriting stage and go on directly with storyboarding.

Determining the best approach towards storyboarding is something to be done based on each project’s specific needs. But generally speaking, for 3D Animation Studios who have bigger productions, bigger teams, and work with multiple clients, the first approach definitely fits better.

Take a look at the following example of storyboarding in animation: 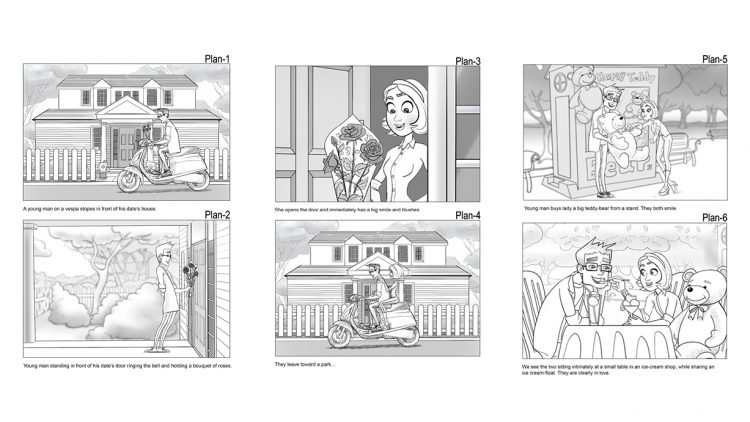 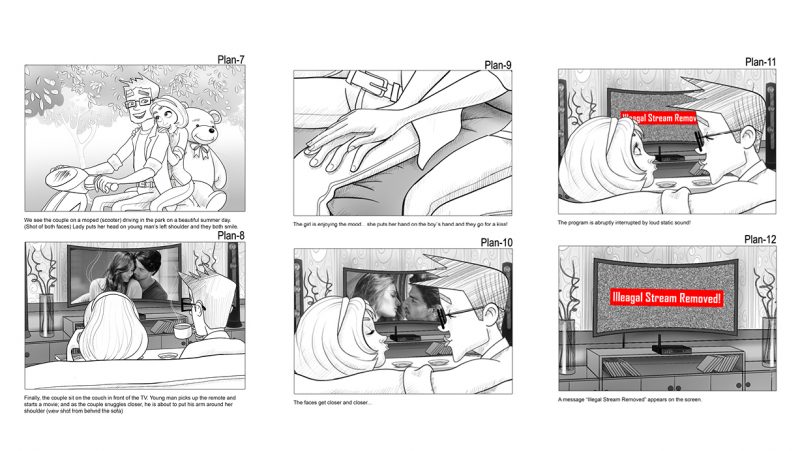 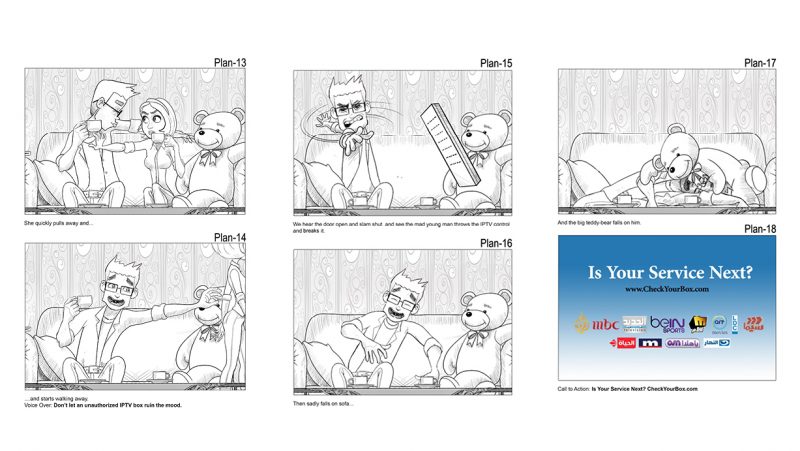 And this is the actual video:

Storyboard in the animation process is 3 stages

Revision means you have to version your storyboards in a meaningful manner. If the changes are minor, the same version can be adjusted as a subsequent draft. But if the storyboard needs major modification, the necessary changes will be made and the document will be updated as a new version.

All previous versions and their subsequent drafts should also be kept as references, in case there is a need to compare two or more drafts together to see which works better. These refinements are normal and to be expected in various projects.

Storyboards can be as simple as basic sketches to a fully developed depiction of an idea created by a team of storyboard artists, using the latest software and digital art tools. The bigger or more complicated the product, the greater the need for a well-developed storyboard.

For some animations, color palettes might be used for storyboarding, whereas in others an outline would suffice. Diving deep into detailed coloring at this stage instead of using greyscale coloring is something to be decided by the production team.

But generally, you shouldn’t really expect to see many details in a storyboard. Details will be part of the design stage, better to be dealt with when the right time comes.

Visuals can’t always tell the whole story on their own. That’s why storyboards are created with panels, titles, and captions conveying major camera moves, certain actions, shots, dialogues, and staging.

Every animation studio or artist has its own structuring method for its storyboard panels. There’s no right structure for storyboards but most animation projects in Dream Farm Animation Studios are done in a 6-panel single page template, just like the one you can see below; three on top of three, with the right ratio. Scene number shot number, and three boxes for dialogues, actions, and staging are inserted for each panel. 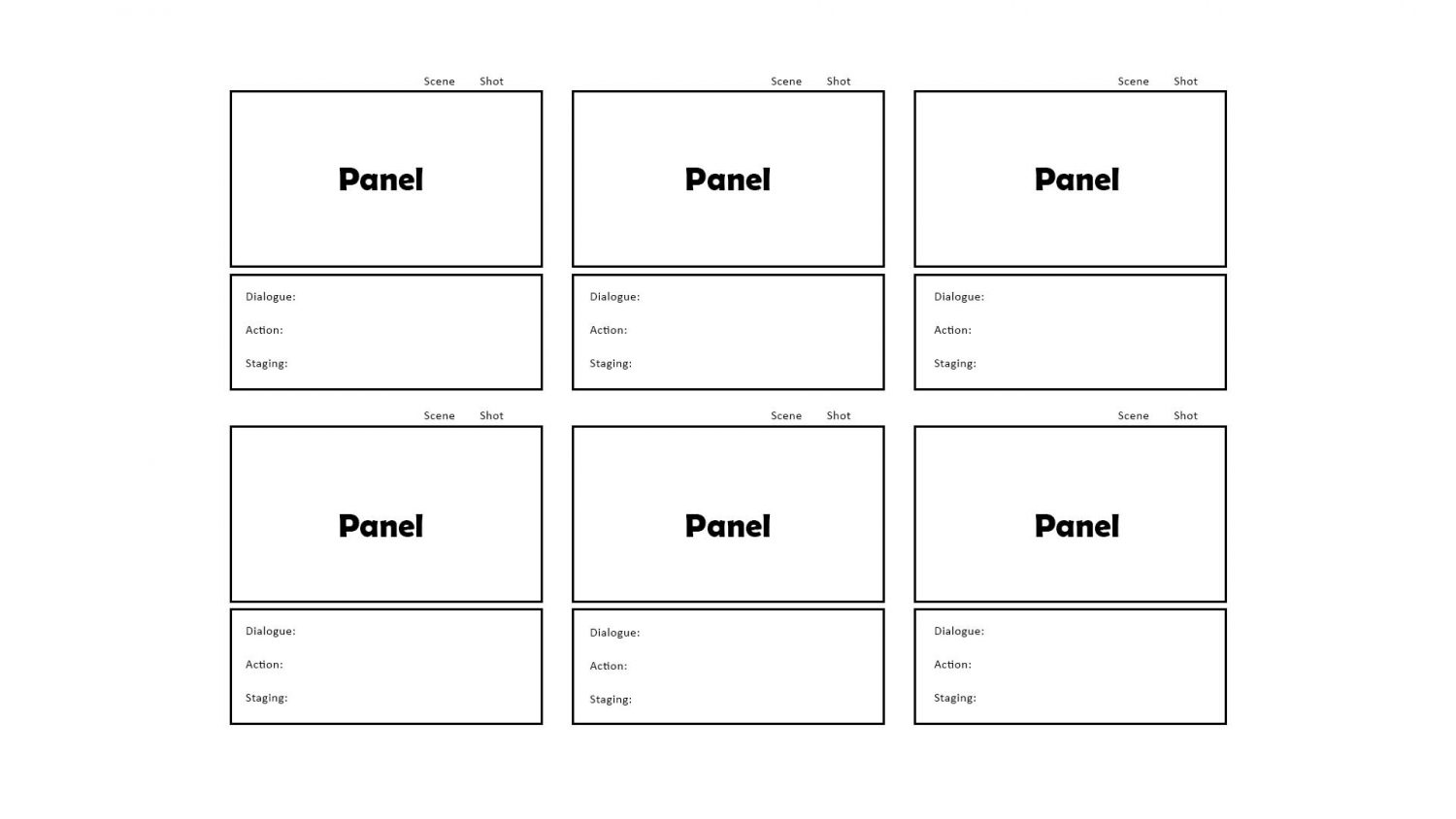 Writing captions under the drawings, using arrows to show camera movements, and coloring the main objects or characters to diﬀerentiate them from the background will usually help better display the scene in a storyboard.

Why labeling storyboards is important?

Correct labeling of the shots is important; it keeps the project material organized and easy to find/track by creating a unique ID for each panel. Most storyboard software will automatically allow you to manage panel numbers quite easily.

Here’s an example of labeling to better explain the point: 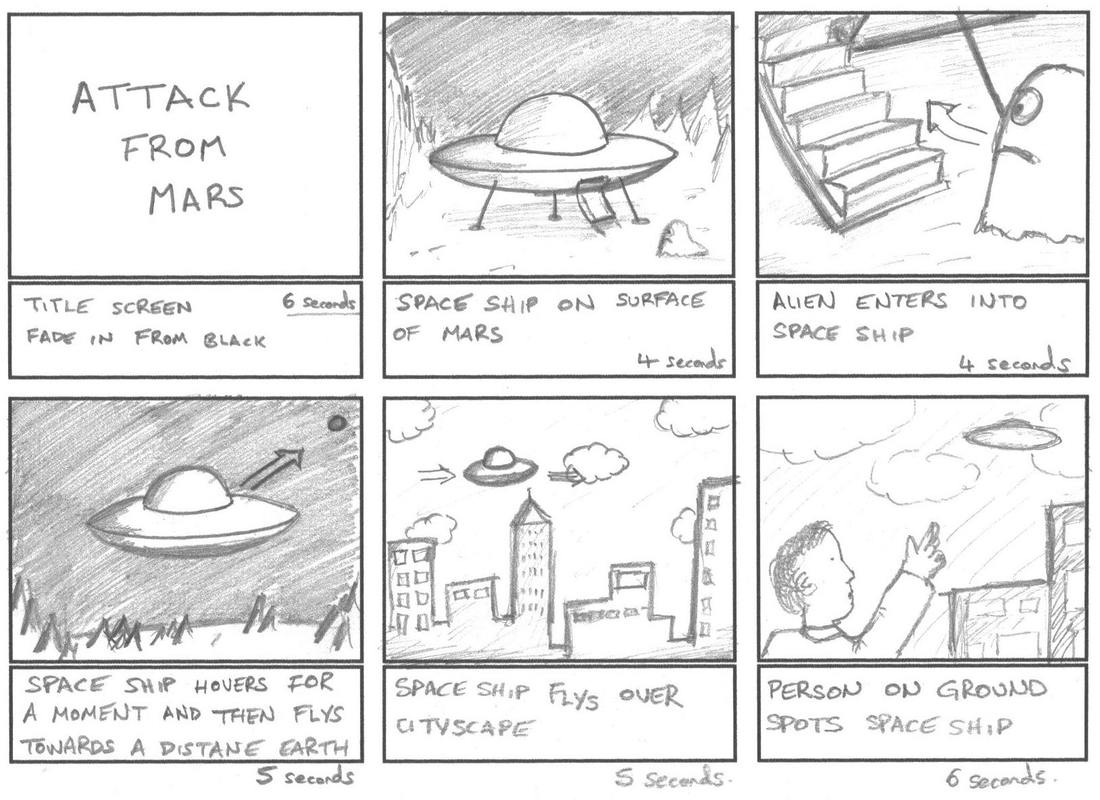 Why do animators use storyboards?

Sometimes storyboards are another way of coming up with and writing a story in the first place. Animators who skip the scriptwriting phase of the animation pipeline use the storyboard as the script. They believe it to be the fastest and most effective way to work through a story for them. Although this approach is not recommended by Dream Farm Studios.

The primary goal of storyboarding is to visually convey the story/script in an eﬀective way and as close as possible to what the final 3D animation is intended to look like; so that by seeing it, one can understand what’s going on in the story immediately.

A storyboard is also a diagnostic tool that will help you find weak points in the story and probe into improvement opportunities and explore alternative ways of showing an idea. Major or minor holes in the story or script will easily come to the surface early on with storyboarding.

And more importantly, making changes is also much easier in storyboards compared to a finished render. It is important for a 3D animation studio to work out proper actions in the storyboarding stage rather than in production. Confirmed storyboards will act as a reference for all further developments.

The art of storyboarding is a powerful tool to bridge the gap between the script (or story) and the final 3D animation product. It is an important part of the pre-production stage of the 3D animation pipeline that can facilitate production, get everyone on the same page, avoid flaws and keep things on track if used properly.

A storyboard is an effective and concise document for knowledge sharing about what is required in the production phase of the 3D animation pipeline in an animation studio. Choices can be made about the storyboard format and level of detail, but all storyboards should contain 3 main information types: The sequence of scenes, whatever the viewer will hear or see on the screen, and the technical information provided for each scene.

Storyboarding for a 3D animated video at Dream Farm Studios is usually done through three simple steps: planning, production, and revision. Confirmed storyboards will act as a reference fo all further developments, starting with the animatic.

This is a nice piece… Thanks for sharing.

Thanks for reading Michael!

I really like your articles because you really dig deep into the concept and use videos to complement everything on your site. Keep up the good job

I think what makes storyboarding in animation so good is the idea of berating life into our imagination.

That’s right Keiw, completely agree with you on that.

what is storyboard? It’s a little piece of paper that we draw everything we have in mind so that we know we’re not imaging something that can not be accomplished with 3d animation.

Oh, we didn’t see this one coming. So STARIGHFORWARD and to just right.

It’s always a challenge to make a storyboard so real that it can imitate the real animation. Yet, we as artists don’t need that we just need a rough sketch of what we are thinking in our mind.

These are definitely the words of a storyboard artist. thx Eliaie.

would love to see something like this as it relates to 2D animation. specifically for the production and post-production segments.

Glad to hear that Jeremiah. Thank you for the feedback. We’re currently working on having a complete breakdown for the 2d animation production process. We’ve talked about the storyboard briefly here, but we’ll add a complete guide for storyboards in 2d animation too.

this is nice story board telling with 3d animation

Thank you, appreciate the support.

Sir ,now I am in 12th standerd what will I do to become a storyboard artist ..

You can start by coming up with a concept then go deeper into storyboards.

Thank you very much Jason.

Great write-up! Really found it useful because just started my career as a storyboard artist)) Also I’m researching for knowledge on MakeStoryboard blog, here are the info about the history of Storyboarding

When I made my very first 2D ‘explainer’ I didn’t know what storyboarding was. I had to change directions so many times that I abandoned the project. I only completed it because somebody online asked me about it.
This time I’m going to plan it out ‘before’ I commit to animating it. Thanks for posting.