How does shape language impact a character design? (with illustrated examples)

In 1946, Solomon Asch wrote a paper on how the physical aspects of a character affect the viewer’s impression of its emotions:

Body shape has a tremendous impact on the overall impression of the character. If you ever looked at a cartoon character and though they seemed confident but didn’t know why, you probably were not aware of the character’s shape language!

Shape psychology is widely practised in Disney and other famous animation studios ,but the effect of shape is not confined in the movie industry. A lot of marketing agencies and animation studios utilize the power of shape language to design well-structured characters that are key to brand awareness and lead generation.

In this article, we briefly talk about different character shapes and how each of them can be used to communicate different emotions. By knowing some basic universal rules about shape psychology, you will be able to tell a bad character from a good one. This way, you’ll have more knowledge when outsourcing your character design projects to a character design studio. Ok enough talking, let’s dive in!

Shape Language is a concept used in art and 3d animation to communicate meaning based on shapes we are familiar with. When used in character design, shapes can tell a story, show personality, and illicit an emotional response in the viewer without using any words.

David Colman, an Emmy winning character planner found in his studies that:

Body language and overall posture of the character has more weight of emotion compared to facial expressions (eyes, eyebrows, lips and so on)

Some designers argue that color is more effective in conveying emotions; however, you should know that color theory is pretty subjective and can be interpreted in different ways from culture to culture. Shape language, on the other hand, seems to have a universal meaning making it much more important for designers and brands.

(We have a complete and simple guide on using color for a character, you can check it out on Color theory on character design page.)

Colam also says Communicating a personality through body language ,and the silhouette is far more potent than only showing emotion through facial expression. That’s why we usually tend to draw the body first and then add more details with the face.

What’s more, is that  we often assign qualities to a person or a character in our subconscious only by perceiving them as a combination of shapes. 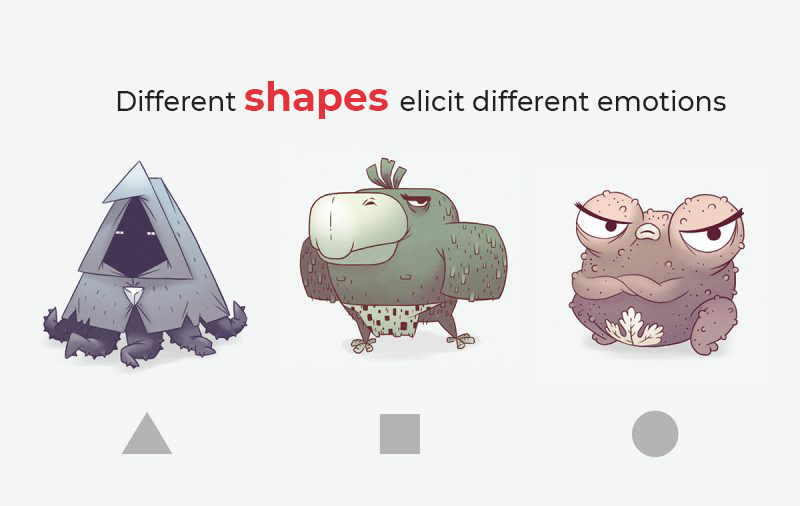 What are different types of shapes in character design?

You might probably have seen some chubby faces and wondered: “Isn’t that cute?” Well, there’s a reason for that. Circles and ovals are mostly used for friendly and outgoing faces. You can experiment with putting circular shapes in different parts of a character’s body, clothes, and hair to show the same warm feeling. 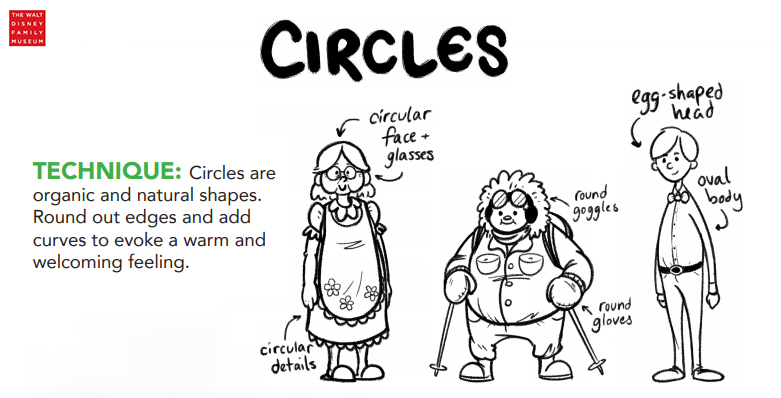 Have you ever thought about the reason why square-faced people look more confident and inflexible? That’s because square-like shapes relate to straight vertical and horizontal lines that communicate strength, stability and confidence. Squares can both be large and daunting or comforting and clumsy. They often depict steadfast characters who are dependable and are commonly used for superheroes. 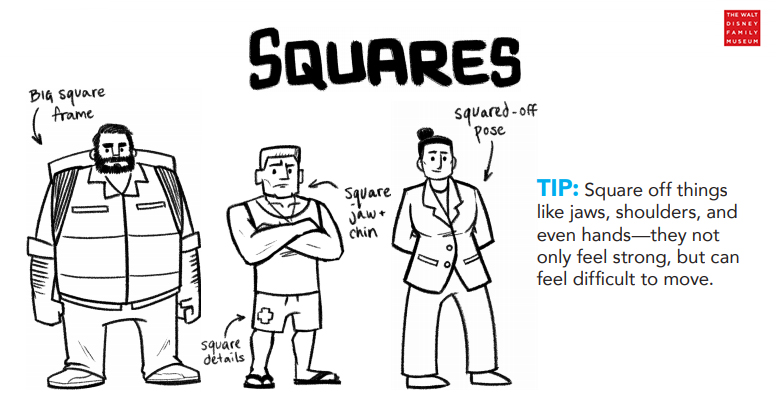 And finally, the evil shape! Triangles are the most dynamic of the three shapes we have mentioned so far. Bad guys and villains are often based upon dominant triangular concepts, as they appear malicious, sinister and communicate with the most aggression. It is the circle’s most opposing shape and often used for antagonists. 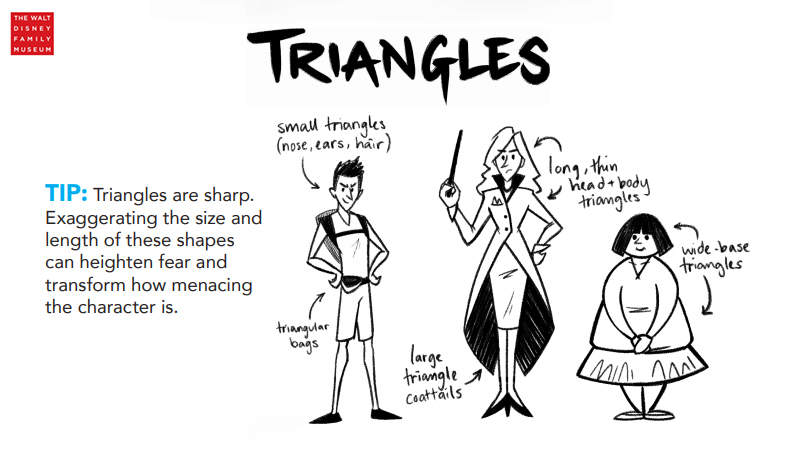 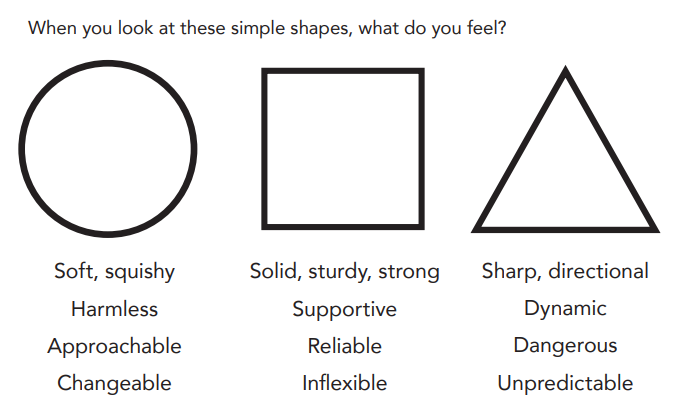 Up (2009)
One of the main character’s of Up, produced by Pixar Animation Studios, is the grumpy Carl: A stubborn old man who wants to stay put and has a generally solid and static manner that is much revealed in his square-like shape.

Charles Muntz – the antagonist – has a much more angular concept as seen for example in his head, shoes and cane. The jacket also gives him a very triangular major shape. Muntz’ leader dog, Alpha, also has a much more malicious appearance compared to Dug’s friendly countenance – a triangle versus a circle. This is something that we can relate to reality as well: Aggressive dogs tend to have more angular concepts than the general, more circular-based, family dogs. 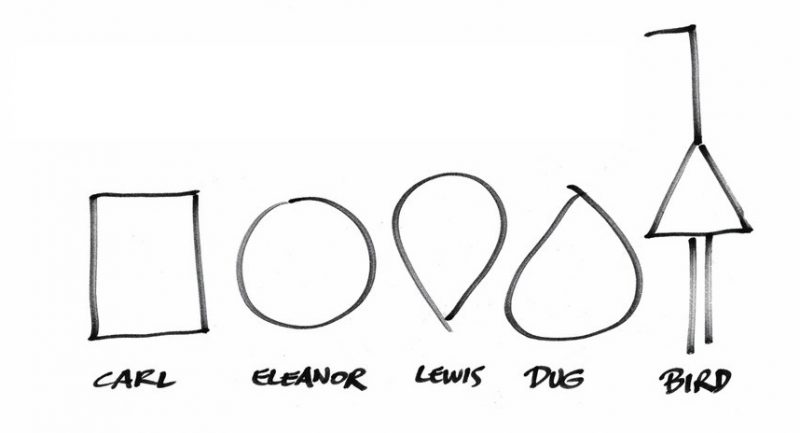 Shape language in Games, what is beautiful is good !

By using shape language techniques and principles, we define the personality traits of a game character. The subtle details of the character’s face, for example, scars and pimples, make up the good and the evil characters in the world of video games. Take a look at the following image where two game characters face shapes are compared next to each other:

Characteristics of the protagonist:

Characteristics of the antagonist

Moreover, If you look at the protagonist, it’s obvious that the character has favorable personal qualities and overall happiness. This is often referred to as the “what is beautiful is a good stereotype” or “the halo effect” and is widely practices in  character design. Uncharted 2 (2009), developed by Naughty Dog, uses the concept of “what is beautiful is good”, as does the evil twins of Mario and Luigi, developed by Nintendo.

How is shape language different in some situations?

One might think that all characters are made up of basic shapes likes circles, squares and triangles, but there are situations where we can mix all these shapes to create a character. Besides, circles, squares, and triangles don’t always mean one thing. There might be times when shapes are used to disguise the purpose or functionality of a character, object, or location.

Circles: There may be circular and rounded characters who are designed to look kind and are the antagonist. Using circular shapes is purposeful and can mislead the audience about
who the character is. Adding circles to villains can imply their level of weakness and express that they do not have to look dangerous to be dangerous.

Triangles: These shapes don’t always mean things are bad. Lots of triangular shapes on an object can allude to its strength. Triangles on a character don’t always mean that they are a villain either. They can have spikes on their clothes for protection like a warrior, or points in their hair or face because they are intellectually sharp. 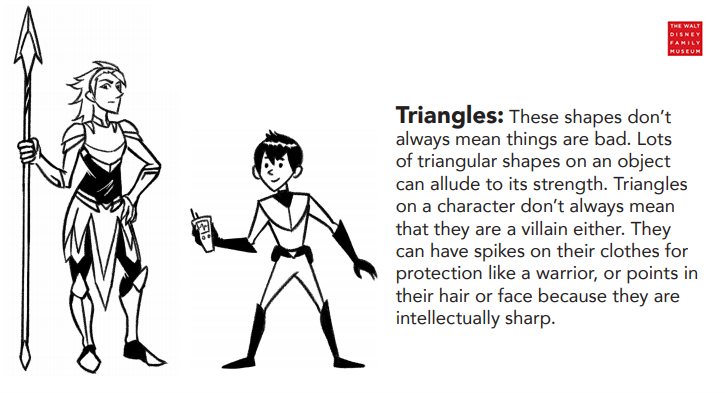 A case study about Shape Language in Dream Farm Studios

At Dream Farm, we come across a lot of character design projects, some of which are already designed and need some tweaks and adjustments to get better recognition. Below is one example of a project in which the character shape language is not designed suitably for children.

It’s a rule of thumb to use less triangular, square and rough angles in the design, according to the age group of animation and the psychology of geometric shapes, and to use more curved shapes. Besides, adding larger claws for the character and reducing the width of the hand on the arm and forearm is more appropriate and more modern in terms of design. It is recommended to remove the current floor and make the toes visible because in some places, such as climbing rocks and trees, it can create anatomy and a beautiful style in animation.

We all know how a character is viewed differs from one person to another. However, there are some universal rules about shape language that are proved to be constant all over the world. Knowing different shapes in character design and using them at the right time and the right place will make your character come into life.

Shape language Challenge for our readers!

Nothing in animation counts until you start experimenting ,so we are going to announce our little fun and educational challenge for you.

Look at the following exercise and try to come up with different ideas for character design. You can share the result in the comment section by attaching an image or drop us a line on our Facebook page. What are you waiting for? Give it a try and spark that inner designer in you! 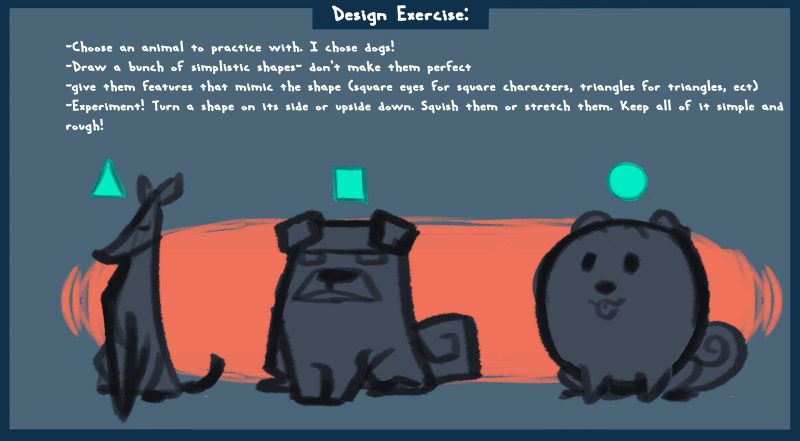 Here’s my take on a square like character with hard feelings and stubborn personality!

Awesome! though it’s not an animal per se, we accept it 🙂 or maybe it is!

Thank You Abdelrahim, it’s so nice to hear that.

Lovely as usual and I always learn something new. Thanks

I am a Professor of Digital Media and I teach a course in Character Design. This fits exactly with my teaching

Thank You very much Timothy for endorsing this article. We would highly appreciate it if your could show us some support and share this article with some interested eyes.

Do you necessarily have to follow the shape language to make a good character design?

Of course you can do it without the shape language hameruru, but it’s like writing a paragraph without following the grammatical rules!

How long should a commercial animation be? (Data-Driven)